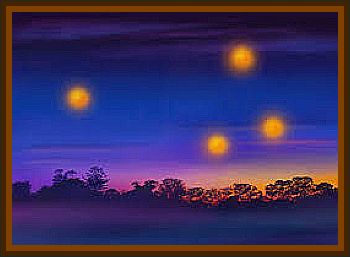 On the evening of May 13, 1952 at a little before 9:00 p.m. in National City in the San Diego area of California, aeronautical engineer, Donald Carr, along with six other corroborating witnesses, would witness a strange glowing sphere in the evening skies overhead.

The object was coming out of the north at an altitude of around 15,000'. Its speed was such that it was most definitely not a conventional aircraft and when viewed through a telescope was a definite disk shape. The object would perform turns in the air before changing its direction and heading back northwards.

Carr would note that these sudden changes of direction and rates of speed should have resulted in accompanying noise. Instead, the object moved in apparent silence.

Carr would later state that since this object followed an apparently controlled course it was moving under the influence of gravity. He would continue that it must have been guided by an intelligence unknown to us.

Ten days later on May 23rd, another sighting of strange spheres came to light.

Burbank resident, Orfea Angelucci was driving home from work. All of a sudden, a strange tingling sensation began to overtake him. Out of nowhere, a glowing silver metallic disk appeared in front of his vehicle. As it moved away, the strange sensation ceased. When he looked in front of him, where the disk was, there were now two glowing spheres.

Suddenly, these spheres morphed into a man and a woman of noble appearance. He would recall that they would materialize before him as if on a screen. These two strange mysterious humanoids would hand him a goblet. He would drink from this and strangely it relieved his unpleasant sensations.