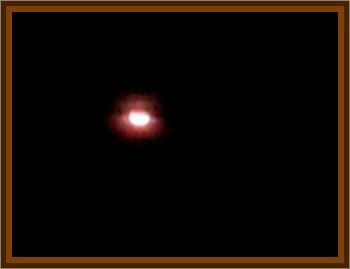 I was in the Coast Guard, standing watch on night in a watch tower at Point Judith Coast Guard station. I saw a light to the east and looked at it with binoculars. It seemed strange. It was yellowish gold and was holding steady. It started to move toward the north in the direction of Newport RI.

At the time the Quonset Naval air station was still in operation.

It was about five to eight miles away to the east. It continued to steadily move and came very close to to Brenton Point.

It glowed, and I could not see the shape clearly as the light of the object made the edges diffuse but strong. The light was just a curiousity to me.

Then it shot south so fast that I could not follow it. I moved and looked to the south and it was there stationary about what I thought was about 15 miles. It stayed there for quite a while then it shot off to the east and zipped out of sight.

A short while later some jets from Quonset came from the direction of Newport and headed straight out to where the light had been. They soon headed back.

I wrote the incident up in the log and I was told to forget it and to take some leave. I took the leave but I didn't forget it.