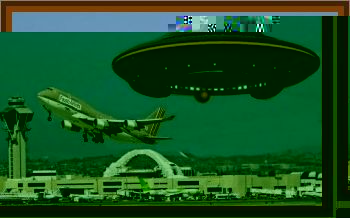 An aircraft in flight was allegedly buzzed by a missile shaped UFO over the city of Benevento, located 50 miles northeast of Naples.

This was the report made to Italian authorities by the commander of an Alpi Eagles Fokker 100 which, at around 8:00 p.m. on Wednesday, June 25, 2003, was about to land in Napoli with 80 passengers, when the commander called the control tower to report having observed a strange and large, elongated missile like object, coming towards him from the opposite direction and passing very close underneath the plane.

The Fokker's flight had originated in Palermo, on the island of Sicily just south of Italy.

The claim was investigated by Italy's National Flight Assistance Agency, and the Civil Aviation National Agency.

In a report filed on Thursday, June 26, 2003, the Fokker, commander described an unidentified flying object approaching him from an altitude of approximately 8,000'. It was cylindrical in form, 10' to 13' in length, white in color, and reflected the sun's rays.

The object, observed by both Fokker pilots, aircraft commander and co-pilot and was apparently not detected by radar systems.

For security reasons, however, the state prosecutor in Napoli opened an investigation then confiscated the radar recordings and radio dialogue between the aircraft and the control tower.