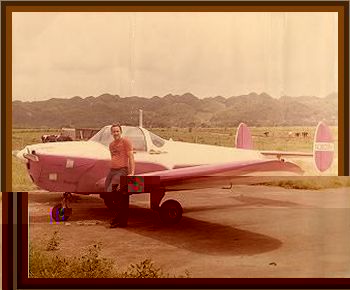 At 6:10 p.m., Jose Maldonado Torres and his friend, Jose Pagan Santos, took off from Los Americas International Airport in Santo Domingo, Dominican Republic in an Ercoupe aircraft marked N3808H. The Ercoupe was owned by Santos father Jose Pagan Jimenez, an Aero Police Officer for Puerto Rico. They were bound for home in Puerto Rico.

Picked up radio transmissions from N3808H:

Mayday, Mayday, Ercoup ochero cero, eight, zero, zero, Hotel. We can see a strange object in our course, we are lost, Mayday, Mayday.

An Iberia Airlines Flight IB-976 en route from Santo Domingo to Spain responded to the Mayday and received a reply:

Ah we are going from Santo Domingo to ah San Juan International but we found ah a weird object in our course that made us change course about 3 different times, we got it right in front of us now at one o'clock, our heading is zero seven zero degrees, our altitude one thousand six hundred a zero seven zero degrees, our VORs got lost off frequency.

Iberia Flight IB-976 then relayed a message asking from San Juan Center asking N3808H to turn on their transponder.

N3808H replied that the Ercoup was not equipped with a transponder.

At 8:06 p.m. Iberia IB-976 asked for their call sign and estimated position and received this reply:

Right now we are supposed to be at about 35 miles from the coast of Puerto Rico but we have something weird in front of us that make us lose course all the time I changed our course a second ( unintelligible ) our present heading right now is 300 we are right again in the same stuff, sir.

They were not heard from again. At 8:12 p.m., the Atlantic Fleet Weapons Range verified the last radar position of N3808H as 35 miles West of Puerto Rico. A search that included Santos father was then mounted which centered on this last radar position. It was discontinued after two days when no trace had been found. No trace was ever found.