Mysterious Lights Photographed From The Sky 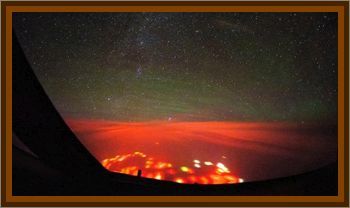 An unexplained glow coming from the Pacific Ocean has sparked worldwide speculation after a pilot shared these pictures online.

Mysterious glowing lights that appeared in the Pacific Ocean far off the coast of Russia’s Kamchatka peninsula have been captured in a stunning set of photos. Dutch pilot Christiaan Van Heijst snapped the ethereal orange glow at 34,000' through the clouds about 4 hours into a flight from Japan to Alaska. It had been an uneventful flight and I was just about to eat my meal when there was this really strong green glow and lights, which we assumed was the Northern Lights, the 31 year old mentioned.

Then, in the very far distance beyond the horizon there was a really bright flash, like a lightning ball but more intense and very short, shorter than a normal flash. I have never seen anything like this, and there were no flashes before or after this single explosion of light. The cargo airline senior first officer and his German colleague had been warned about possible volcanic activity along the route, part of the Pacific’s Ring of Fire, and were keen to avoid dangerous ash clouds. Both men have hours of experience of flying around these regions and route so knew what conditions to expect.

About 20 minutes later in flight I noticed a deep red orange glow appearing ahead of us, said Van Heijst. This was a bit strange since there was supposed to be nothing but endless ocean below us for hundreds of miles around us. It looked like lights from a city or a big harbor, or perhaps fishing ships. But they were completely clear and more intense. It didn’t look artificial.

Despite the pair’s main concern being flight safety, the closer they got, the clearer the lights became. The glow was so intense it was illuminating all around us, added Van Heijst. It was on the surface of the ocean illuminating cloud layer above. It gave an eerie feeling, it was fascinating to see.

Van Heijst, who has been a pilot for 10 years and in his current job for three and a half, enjoys photography as a hobby and quickly pulled out his camera to capture the images presented here. He reported the strange sighting to air traffic control, who were reportedly very interested in seeing the photographs. But they could not compare the findings to other flights as there were no other planes within 1,200 miles. Since sharing the photos and his story on his blog, Van Heijst reports being inundated with emails from interested parties including scientists, seismologists and the American Aviation Authority.

I find it absolutely fascinating to see what we saw is apparently so interesting for so many people, he added. I have read about light phenomenon and I have seen a few strong lights in the sky but nothing comes close to this. However I am sure there is a logical explanation.

The pilot said he has also received some negative responses from people who claim the photos are fake or a hoax. I would be skeptical too, if I hadn’t seen them myself but it is the creepiest thing I have experienced so far in my flying career, he said.