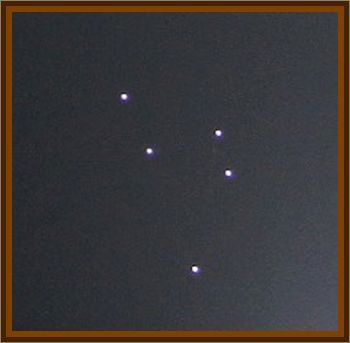 I viewed 5 objects. At first thought that they were birds flying at night over an adjacent hotel to mine, and seemed to be illuminated from below, thinking that it was glare from lights from the hotel.

The ojects were flying in a fluctuating pattern almost simulating what large bird do, bobbing up and down. There was no sound from them. Then they made a turn towards the inland area off the beach where the sky & surrounding area was much darker from the hotel beach area.

They seemed to stop, and that is when I realized that they were not birds, or anything that I had ever seen before.

One light seemed to hang low from the pack, as they continued to bob up & down and side to side. I did not get any feeling of how high, or far away they were.

Then in an instant they took off at no speed I have ever seen anything go except a comet, and they were still faster then that.

I checked with people in the area, and no one I asked had seen it. When I got home and checked to see if any sightings had been reported, I found that one was reported in England, the same night, just around the same time I had spotted at 10:30 p.m.

They seemed to hang around longer in the sighting in England. We both reported the same things and movement! In both cases the sky was free of stars, which made the viewing much easier, and no chance of mistaking them for anything but what they were UFO's.

It has changed my life, and I am now a true believer.