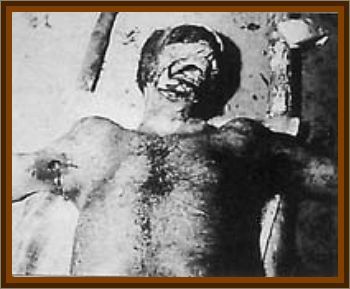 In the last forty years of UFO research, one of the most baffling questions that have plagued researchers has been: Is the UFO Phenomenon dangerous to humanity?

Over the years, there have been numerous cases where the phenomenon has figured into human deaths, but as a rule, most cases have been officially ruled accidental. When speaking of cases where death has resulted, usually most assume cases where military pilots have died as a result of chasing the phenomenon. One of the most famous of these military chases that is discussed when ever the subject of death and UFOs is raised, is the famous Mantell Case.

In one of the less well known cases, The Kinross Incident, during the mid 1950's, a military jet interceptor was observed on radar being absorbed into a UFO over the Great Lakes. No trace of pilot or aircraft was ever found. In another case reported was the case of the Cuban UFO Intercept. In this case a Cuban MIG was locking on his weapons radar when the MIG exploded in mid air. The wing man was certain that the UFO had fired some type of weapon, but other than the jet exploding, no other smoke, flame or other obvious weapon firing was observed.

The matter of either overt or covert hostility on the part of UFOs has always been treated warily by serious researchers. On the one hand, if the enigma is hostile, then several questions must be faced:

What, if anything should the powers in authority tell the public?

Is the government capable of handling a threat of this type?

Is the public ready to face an issue as potentially terrifying as a possible threat from somewhere else?

Other than incidents involving military involvement, have there been cases where civilians have been injured or killed during some type of UFO encounter?

Is it possible that the reported cases of UFOs, and their occupants abducting unwilling humans for some type of medical or genetic experimentation could be true?

Now, if any of this is actually occurring, then what consequence do the Human Race face in light of the above?

According to Mr. Phil Imbrogno, during the research that led to the writing of Night Siege The Hudson Valley UFO Sightings by Dr. J. Allen Hynek, Philip Imbrogno, and Bob Pratt, Imbrogno has stated that on several occasions, Hynek specified that he wanted no mention of the dozens of human abductions that they had already uncovered at that time, to be mentioned in the book. Hynek was afraid of the adverse publicity if word of this detail leaked out to the public. After Hyneks death, Imbrogno stated publicly on Compuserve and other public forums, facts of abductions, animal mutilations, and even several cases of mysterious deaths of humans, that he indicated could possibly be linked to the UFO Phenomenon.

While researching several stories for UFO Magazine, a number of prominent UFOlogists were interviewed, over the last several months, and in each case, the question of human deaths, in connection with animal mutilations, invariably was raised. Most readers of this text will be familiar with Mr. John Keel, who many regard as the last of the Great UFOlogists. From the earliest days of modern UFOlogy, Keel has been a force to deal with. Keel has a unique slant on the subject that most will never experience. According to Keel, the phenomenon has always had an unexplained hostility towards humans, that have led to untold numbers of deaths. While Keel will be the first to explain that he rejects the ET hypothesis, he does not doubt the phenomenon a bit. In what many UFOlogists consider as one of Keels best works, The Mothman Prophecies, Keel related report after report of animal mutilations involving cattle, dogs, horses and sheep, and also related what were called vampire killings of four humans in Yugoslavia, were the victims were mutilated and drained of blood.

After an interview with John Ford, the Chairman of the Long Island UFO Network, the public became even more convinced that the aspect of potential UFO hostility should be investigated. Ford relayed a numbing number of animal mutilations, human disappearances, human abductions, covert involvement in areas that suffered high numbers of animal mutilations, and even armed military helicopters that chased UFOs over civilian communities. Ford, who is a officer of the Federal Court system, did investigations into the disappearances of mostly young adults over a 12 month span, in areas of high UFO overflights, and after having several personal friends who were police officers of his local municipalities look into the situation, came to the conclusion that the facts were being suppressed. The reason given was that there was no need to panic the public.

Although no iron clad proof can be made for direct UFO intervention, the circumstances are extremely suspect.

After growing up in an age where the entire human race can be decimated by nuclear, biological and chemical weapons, the human race somehow manages to keep moving forward. We have seen more people panicked over a shortage of gasoline than imminent nuclear holocaust, yet somehow when the subject of UFOs crop up, the government doesn't want to panic anyone. It really makes one wonder what they know, that the public should also know. It's common knowledge that they are planning to share or reveal anything soon, to anyone.

In January, 1989, it came to the attention of the MUFON State Director of Idaho, Mr. Don Mason, that cattle mutilations had occurred once again in the southeastern section of Idaho. After an investigation by a MUFON investigator, the facts were as follows:

All the appearances of what is today considered to be a classic case of animal mutilation. As of this date, February 15, 1989, the final lab reports are not back yet, but already the Sheriffs Department has labeled it a cult killing.

No tracks, tire or human, around the animals even though it had just rained, no unusual activity reported by the ranchers that evening, and one animal was found next to an occupied house.

One of the ranchers admitted that this was the second time he had been hit by the mysterious mutilators. The last incident had only been a bit over a year previously, and they were worried enough that all had their deer rifle within easy reach.

After reading up on the investigations of cattle mutilations, I became familiar with the cult theory of perpetrators. The Idaho Department of Law Enforcement drags it out every time there is a new rash of mutilations. The problem is, and every one is aware of it, that no one has yet been brought to trial, or arrested yet for these crimes. Out there in the west, people know that you are flirting with a ranchers bullet if you are caught fooling around with the ranchers cattle. They are his livelihood, and he will defend it. Yet, the mutilations keep occurring, and no one is any the wiser, or or so we are led to believe.

With the subject of animal mutilations fresh in everyones mind, Don Mason was interviewed, when he shared information that the investigator that had been assigned to the above mentioned case had come across a very mysterious death of a man back in 1979. According to the report, 2 hunters in the Bliss and Jerome area of Idaho had literally stumbled across the nude body of a man that had been hideously mutilated. The body was in the literal middle of nowhere, nude except for a pair of underpants, his penis had been removed, his lips sliced off, and several other classic mutilation cuts. Although he was in very rugged country, his bare feet were not marked as if he had walked in that terrain, but yet no other tracks, animal or human were evident anywhere. After the police were notified, an intensive search was mounted, and miles away, the mans possessions were recovered, yet no one yet knows how the body ended up where it was found, or even more importantly, what happened to him.

It should be noted that this area also had over the years, many unexplained UFO reports and cattle mutilations.

Being familiar with reports of human abductions and mutilations that had surfaced in the last several years in reports such as the Lear documents, Grudge 13 reports and others, makes one unsure what can be believed, if anything. an individual named Scot, a pseudonym, that was still employed with a police department in this area at the time, and who was a detective. He had also been involved in the last several years with several cases of mutilations that he had been called upon to investigate, always with negative results. He was as curious about this phenomenon as anyone, and since he was still an active duty police officer, he had access to the department computer, to access the NCIC system that is maintained in Washington D.C. by the FBI. After giving Scot the criteria for a search of unexplained human deaths, that involved factors of mutilation, and asked that the search go back to at least 1973, involving this area of the Northwest. Scot ran the request through the department computer. As he mentioned at the time, he had expected to get realms of reports back that would have to sorted through, to get to the reports that would be for further study. Scot ended up requesting that the inquiry be run back to 1970, and involve not only Idaho, but also Utah, Nevada, Oregon, and Washington states. Because of the magnitude of this search, Scot stated that it would take about one week to get the results back into his department.

On the 14th of February, Scot soon appeared very troubled. His exact words were:

That something is really screwy. I got the request back from NCIC on Monday, and there has gotta be something wrong. They told me that they had no unsolved murders at all, zero, that met that criteria. That any further requests will have to be made by voice, telephone call, with proper authorization. Somebody is sitting on something, big as Hell.

It was obvious that something was as screwy as hell. After all, anybody that has had any dealing with law enforcement knows about the Green River Killer in Washington state. This serial killer is credited with at least 49 murders of young women, and admitted to twice that number. He was caught finally in 2001, Many of the Green River Killer killings showed some types of mutilation, and if nothing else, at least some of these homicides should have shown up.

As a side note, Investigators have been warned by a prominent UFOlogist, that there was a lid screwed down tighter than you would believe in regards to human mutes, mutilations.