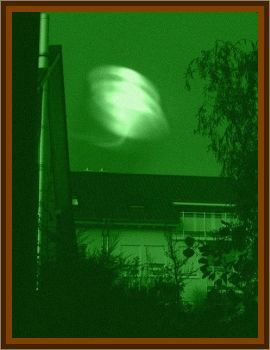 Jane Murphy had gone to bed late when she suddenly woke up standing in a field feeling very cold and wet.

She then noticed a huge metallic object hovering over the field, suddenly a group of figures, as many as 10 approached her. The figures were vaguely humanoid, but for some reason Jane could not focus on them. One of the figures had a cloth in his hand and put it over the witness face.

She pretended to be unconscious but they injected her and she blacked out. When she woke up she was on a bed in a strange room. Several figures were around her communicating via telepathy telling her to look at them. One of the entities was 7' tall, human looking with totally black eyes. She was told to bathe and then entered a plastic looking object that fitted around her taking the shape of her body. She was then helped back on to the table in the center of the room and now noticed that all but the tall humanoid with the black eyes had left the room.

In her words one of the alien figures seduced her.

She described her experience:

I looked into his big, black eyes and knew that it was going to happen. Suddenly he was lying on the table and I was lying on top of him, having sexual intercourse in a very unemotional manner. We were embracing but lying perfectly still. I remember noticing his smell. It wasn't very pleasant, not a human smell at all. I couldn't tell if he had any clothes on or not because I simply looked into his eyes.

All I can remember is those gigantic black eyes. It seemed so strange lying on top of this stranger, and enjoying it. It was the best sex I had ever had. When she was returned home to her bed, her mind rebelled at the experience and she tried to convince herself it was just a dream. But she saw the strange puncture mark made by the injection. A picture published in the book clearly shows the odd scar on her neck left by the needle.

After awhile the tall humanoid left the room while, others, including female humanoids had now entered the room. She was then given an extensive gynecological examination. Later she was shown a table covered with a number of brightly colored pills of geometric shapes and was invited to take one.

She was given a tour of the ship where she saw other humans. Her next recollection was waking up back in her bed. She was plagued for the next three months with a strange vaginal infection.