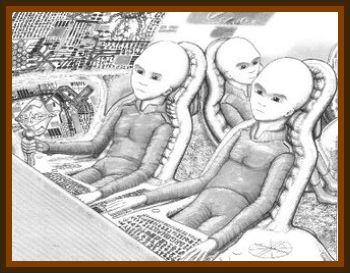 In the 1940s in the United States, one Meade Layne was a paranormal buff, talking about other dimensions of reality the world of the spirits, ghosts, ectoplasmic materialization, materializations and so on.

He founded a research society on these matters, which he said had bona fide scientists as members, whom he designated only by code numbers, so that the malevolent mainstream scientists do not harass them.

Once the topic of the flying saucers had been popularized in 1947, he naturally begun to research this subject, and discovered that these flying saucers really did not come from other planets, but from the fourth dimension, inhabited by the Etherians, beings made up of a form of matter that we cannot touch, who build the flying saucers by the force of the thought, and live in the etheric counterpart of the planet Venus, and other such interdimensional places.

The reason that they now visit mankind so often is that the Sun soon will explode into a supernova.

Meade had made these discoveries on the true nature of the flying saucer by the intermediate of a psychic named Probert. Probert had been contacted by ancient spirits, such as The Yada Di Shi’ite, an Oriental chap who had lived 500.000 years ago as a citizen of an Himalayan civilization, as well as one friend of Gallilée, and a deceased German scientist.

In 1954, the radio host Frank Edwards refers to flying saucers that were rumored to have landed at Muroc AFB, and soon, Layne produced a letter he claimed to be of his friend Gerald Light, an expert on the occult and an astral traveller.

Light told how he had his time of fun when he saw the humiliation of the know it all mainstream scientists who scoffed at the etheric theories confronted with the Etherians beings demonstrations of superior techniques.

Light reported that in company of a Bishop, of a member of the Press and a distinguished economist, people that nobody thought to interview, he had been cleared to visit Muroc Air Force Base where 5 flying saucers of 5 different types had landed, and the Etherian invited the officials on board, including the President of the United States, Dwight D. Eisenhower.

Then, authors of flying saucer books of the lunatic fringe type, from Jimmy Guieu to William Cooper, removed the too obviously nonsensical tones of the story, carefully avoided giving the sources or the background, and gave birth to the ever rehashed mythology of the encounter between President Eisenhower and the aliens at Muroc AFB, aka Edwards AFB. Some authors added their share of short grays to the plot.

Others told of Nordics, and the evidence of the interplanetary encounter it now said to be the allegedly mysterious disappearance of Eisenhower one fine afternoon, which of course explains very well if he went to see the aliens, rather that go to the dentist as others dare to claim.

The Zeta Grays took control of the situation as the U.S. refused to cooperate with the Nordics. The contact was established with the help of project Sigma.

The experiment was to test the public reaction, 4 civilians were brought in for 48 hours, Mr. Mead Layne from San Diego, Mr. Franklin Allen of the Hearst newspaper group, Mr. Edwin Nourse of the Brookridge Institute and a Los Angeles catholic Bishop, James McIntyre. Those 4 were checked for 6 hours on every possible item before getting clearance to view the contact.

People who remember Muroc at that time say the base was closed for 3 to 4 days and all delivery trucks were turned away at the gate. As Mr. Gerald Light stated:

I had the distinct feeling that the world had come to an end with fantastic realism. For I have never seen so many human beings in a state of complete collapse and confusion as they realized that their own world had indeed ended with such finality as to beggar description.

5 crafts arrived to the base, 3 disks and 2 cylinders.

The contact was so classified that even the base Anti Aircraft defense guard was not informed, and the live ammo was used against the approaching crafts.

The attack was futile as none of the shells could penetrate the tough plasma filled hull, eventually the military men watched in amazement as the ships proceeded to land near one of the large hangars.

The disks landed near the runway, each one about 30' in diameter. The cylinders were hovering in the air to secure control of the situation. As Eisenhower and his small group of 6 men watched, the gray aliens disembarked and approached them.

The humanoids were about 5' tall, without helmets. The communication was via mechanical translators the grays wore on their suits. They spoke English. The grays demonstrated their spacecraft for the president and his small circle. They showed their ability to become invisible.

This really caused the president a lot of discomfort because none of us could see them even though we knew they were still there, reported one military witness, a pilot to British Lord Clancarty.

Negotiations were extensive, and the final agreement was established but only in preliminary form.

The grays informed they needed protection and help, saying they arrived from a dying planet, their biological system was decaying, and that they had a genetic disorder, and needed help in order to become denizens of Earth.

They were seeking a cure to save their race and needed underground bases on Earth. In exchange, technology and some other benefits were proposed. At the end, the grays from the first disk got into the second disk and then disks number 2 and 3 left, leaving one saucer on the runway.

The military then dragged the disk into the hangar. The disk had been left in a completely operational state, as a present to the U.S. government.

The disk was hidden in the hanger and later sheltered underground at the North, Haystack Butte, base.

This was possibly the direct cause of President Eisenhower’s first heart attack. President Eisenhower had to tell his vice president, Mr. Richard M. Nixon on this matter, when he returned to Washington, the disk was hidden in a hanger and later placed underground at the North Edwards base for many years.

The seducing of the U.S. government by gray technology began.

By the end of the following month, President Eisenhower’s CIA director, Walter Bedell Smith, Prince Bernhard of The Netherlands, David Rockefeller and other top world financiers, later Secretary of State Dean Rusk and British Minister of Defense Dennis Healy and other Western power leaders convened the inaugural meeting of the Bilderberg Group.

A means of Western collective management of the world order.

One of the early items on the Bilderberg agenda was extraterrestrial contact with the Zeta Reticulian grays. Shortly after establishing itself, the Bilderberg Group collaborated with the Council on Foreign relations another international policy body devoted to world management.

They discussed the problem of adjusting humankind to the extraterrestrial presence.

The Bilderberg group and the Council on Foreign relations decided jointly in the mid 1950s to enter into an arrangement with the extraterrestrials:

The grays were given an island in French Polynesia as a base on Earth. This arrangement afforded them an opportunity to monitor closely Earth cultures and behavior, and it permitted Earth governments a way to monitor extraterrestrial culture and behavior.

It became an on going experiment, according to a former NSA informant.

The U.S. particularly held out for many concessions before agreeing to the arrangement. At that time MJ-12 was unaware of the fact that the grays already had a number of underground bases on Earth and the Polynesian gift was a trap for human civilization.

In 1959 the Rand Corporation held several conferences on deep underground construction. This was done to promote further plans of mutual U.S./alien interaction at those bases.

These conferences were attended by the various military services as well as large corporate constructions firms like Bechtel. Underground construction projects began within a year. Existing underground facilities were beefed up and new ones were started.

Funding for government underground facilities comes from the Presidential shelter funds, as well as covert drug operations conducted by the CIA under the orders of MJ-12.

Over 75 underground facilities have been constructed under various programs. But direct close cooperation with the Zeta Reticulans started in only in 1972.