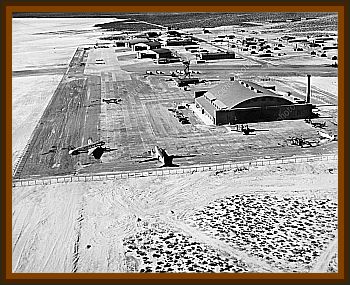 Army Air Force experimental test pilot Major Jowell C. Wise while powering up an XP-84 jet on the runway looked up where others were looking and saw to the north, a yellowish/white sphere about 5' to 10' diameter oscillating in a forward whirling motion without losing altitude at about 10,000' to 12,000' altitude moving west to east at about 200-225 mph.

Before the first 2 objects disappeared a 3rd similar disk or spherical silver object reflecting sunlight was seen, with additional 5 witnesses, to the north flying tight circles at about 7,000' to 8,000' beyond capability of known aircraft, maintaining altitude. No sound or trails. 3 to 4 minutes.

Army Air Force experimental test pilot Capt. John Paul Strapp, Mr. Lenz from Wright Field and 2 others in an observation truck at Area 3 of Rogers Dry Lake for a P-82 ejection seat test saw a round silver or aluminum/white object at first thought to be a parachute, about 25' wide, falling from a height below the 20,000' of the test aircraft at 3x the rate for an ejection seat test, drifting horizontally toward Mt. Wilson to the south at less than 50 to 80 mph, which when close to horizon appeared to have an oval outline with 2 thick fins or knobs on the upper surface which seemed to rotate or oscillate, no propellers, slowly disappearing below the mountain tops in the distance after 90 seconds.

Other witnesses independently, including Muroc CO Col. Signa A. Gilkey and engineer Major Richard R. Shoop & wife saw from a different location 5 to 8 miles away to the north, the apparently same falling object, thin metallic aluminum colored and the size of a pursuit aircraft, reflecting sunlight and oscillating, descend to ground level, then rise again and move slowly off in the distance for a total of 8 minutes. No sound or trail.