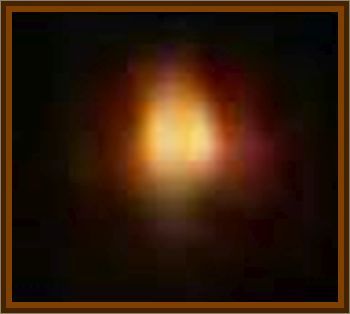 On Tuesday, at 10:30 p.m., Kevin A. and two friends from Auburn, MI were camped out at Hovey Lake in the Hiawatha National Forest on Michigan's Upper Peninsula when they sighted a UFO. Hovey Lake is near Munising, MI, a port town on the south shore of Lake Superior approximately 116 miles west of Sault Sainte Marie, MI.

Kevin reported: The object was traveling from northeast to southwest and would randomly flash very brightly, then fade out, then start to glow brightly again while increasing speed, as if it were entering or re-entering the atmosphere. It looked like a star, but when it started to glow, it had an orange tint to it. The object or UFO or whatever you want to call it changed direction simultaneously.

At 5:30 a.m., on Wednesday, August 11, 1999, the trio took off for the beach. We had been lying on the beach for about an hour when the UFO appeared from the east. At this point, the sun was just under the horizon.

The UFO hovered directly over us high in the sky and then it seemd to play around. The object was zigzagging around and doing crazy loops, as if the pilot didn't know how to fly the damn thing. "While this particular craft was fooling around, two more crafts came out of the north, from Lake Superior, and got into a triangle formation with the other one.

The triangular formation seemed to be large because they were so high up there. I'd say a few miles apart. And it almost seemed as if they were waiting for something. I brought my View Cam along and actually picked up one of the objects, Kevin added.

Although I don't even know how I got it because it didn't show up on my camcorder's 3" screen. Not until later did I realize this when I put the tape in the VCR.