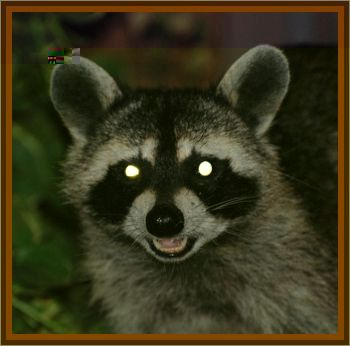 On a Friday night, Dr. Kary Mullis, a biochemist, was driving up to his cabin in Mendocino county in northern California. During that drive to his Anderson Valley cabin, Mullis conceived one of the great discoveries of modern chemistry: the polymerase chain reaction (PCR), a surprisingly simple method for making unlimited copies of DNA, thereby revolutionizing biochemistry almost overnight. Dr. Mullis described his discovery in Scientific American, The Unusual Origin of the Polymerase Chain Reaction, April, 1990. He was awarded the 1993 Nobel Prize in Chemistry for his discovery.

On another Friday night, during the summer of 1985, Dr. Mullis drove up to his cabin. Arriving around midnight after driving for about 3 hours, Mullis dumped groceries he bought on the way, switched on the lights, powered by solar batteries, and headed, with flashlight in hand, to the outside toilet located about 50' west of the cabin. He never got there. Quoting from his 1998 book Dancing Naked in the Mine Field, Mullis encountered something extraordinarily weird on the way.

At the far end of the path, under a fir tree, there was something glowing. I pointed my flashlight at it anyhow. It only made it whiter where the beam landed. It seemed to be a raccoon. I wasn't frightened. Later, I wondered if it could have been a hologram, projected from God knows where.

I said something back, I don't remember what, probably, Hello.

The next thing I remember, it was early in the morning. I was walking along a road uphill from my house.

Mullis had no idea how he got there but he was not wet from the extensive early morning dew. His flashlight was missing. He was never able to find it. He had no signs of injury or bruising. The lights of the cabin were still on, along with the groceries on the floor. Some 6 hours had gone by unaccounted for. Later in the day he found that an area of his property, the most beautiful part of my woods, had inexplicably become a place of dread. A year or so later Mullis exorcised this fear, John Wayne, style by shooting the woods up. While his attempt at psychotherapy proved successful it did not help him find out what had happened that night in 1985. Mullis would become the only known Nobel prize laureate to claim an experience of what might be an alien abduction.

He describes himself as a generalist with a chemical prejudice. Others have described him as, Hunter Thompson meets Stephen Hawking, or, the worlds most eccentric and outspoken Nobel Prize winning scientist. It is not easy to dispose of Mullis's experience as a drug or alcoholic hallucination. For one, he was not affected by either that midnight. Plus, he has not been the only one to have experienced strange events at the cabin.

His daughter, Louise, disappeared for about 3 hours after wandering down the same hill. She also reappeared on the same stretch of road. Her frantic fiancée was about to call the sheriff. Mullis had told no one of his experience until his daughter called to tell him to buy a book on abduction. She was calling to also tell her father about her strange experience. By coincidence when she called, Mullis had already been drawn to the book and was up to the point where the author reports strange owls and little men entering his house.

In his own book Mullis concluded:

I wouldn't try to publish a scientific paper about these things, because I can't do any experiments. I can't make glowing raccoons appear. I can't buy them from a scientific supply house to study. I can't cause myself to be lost again for several hours. But I don't deny what happened. It's what science calls anecdotal, because it only happened in a way that you can't reproduce. But it happened.

Dr. Mullis confirmed all this and more when spoken with recently. Another person encountered a glowing raccoon between the cabin and the toilet. This was a friend of Mullis who did not know of the raccoon story, and was a first time visitor, during a party at the cabin after the announcement of the Nobel Prize win in 1993. This man did not stick around, and fled up the hill towards the house. On the way he encountered a small glowing man, which then suddenly enlarged into a full sized man who said something like:

The friend, who was not experiencing a drug or alcohol induced hallucination left with a friend without informing anyone. They returned to their hotel at a nearby town. That night the man inexplicably found himself outside in the hotel car park troubled and terrified by the impression he had somehow been back at the Mullis cabin. He & his friend returned the following night to the cabin. The celebratory party was carrying on from the previous night. As the man arrived he was shocked to see the full sized man, seen as an enlarging apparition the night before drive up in a car. This was too much for the first time visitor. He left in a panic, holding Mullis somehow responsible for the previous nights events.

Sometime later in tears he revealed the full story to Mullis, who identified the man his friend and he had seen as his elderly neighbor. Mullis checked with his neighbor and sure enough he had come to the party on the second night, arriving to be seen by the terrified visitor. However he was certain he was not there on the first night, not in person and not lurking as a glowing raccoon or a small glowing man that enlarged into a vision of himself. There is more but that can perhaps wait for another more detailed telling.

Given this sort of activity on his property it perhaps isn't surprising that Kary Mullis said he thinks the nature of his experience is even stranger than abducting ETs. Instead he speculates about multi dimensional physics, a la Michio Kakus Hyperspace, 1994, at a macrocosmic level, like anything can god damn happen and the speed of light is not really the limit in terms of interactions with other cultures or whatever. This stuff about grabbing people or subjecting them to all kinds of experiments, it's just anthropology at a level we don't understand quite yet. As for PCR testing of biological samples from abductee experiences he indicated:

He would like to look at this work, however he feels that the idea of an alien culture needing our DNA to survive is very unlikely, and a program on the scale and nature of David Jacobs's "The Threat", improbable. Any culture that could conquer the barrier of space time could have easily conquered the far simpler problems of complex biochemistry and would not need us in the manner described in the grey alien human hybrid agenda theories.