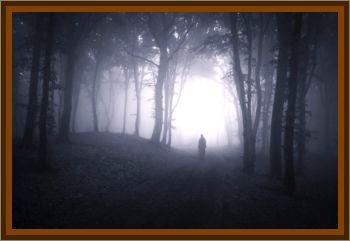 There’s an isolated, forested place in Russia called the M-Triangle or Perm Anomalous Zone where people come out smarter than when they went in. So smart, that in one case, a barely employed, military washout became a cosmonaut after spending only two weeks there.

Researchers there have recorded the sounds of traffic speeding by them, even though the closest road is almost 40 miles away. They’ve heard choirs singing, watched the stars align in fantastic formations, and have even seen strange letters and symbols written across the sky.

Cell phone use is impossible within the M-Triangle, unless you’re standing atop a small piece of ground, dubbed the Call Box. Then you can call anywhere in the world.

No surprise the KGB wouldn’t let civilians into the area before 1988. This may seem the stuff of science fiction but it's not. The M-triangle is a remote area near the Ural mountains, located about 600 miles east of Moscow where strange lights, unidentified flying machines, encounters with translucent beings, glowing aliens, weird symbols and letters written across the sky, have been reported in the forests of the area.

The M-Triangle might be the best place in all of Russia to see a UFO.

Residents of this region count mysterious happenings as part of their daily life.

For over a hundred years, locals have reported highly strange sightings.

It is known that under the Soviet regime, several expeditions were sent to the M-triangle, but exactly for what purpose, and what they found is not widely known.

The citizens of the nearest towns say that the lights in the sky come in many shapes and numbers, sometimes just passing through, but sometimes reportedly they levitate or hover for several minutes, sometimes even hours.

Speculation amongst some UFO enthusuasts suggests that perhaps the former presence of uranium in the mineral rich mountains in the area may be acting as some type of UFO magnet, or perhaps even causing mass hallucinations.

Most people who visited the M-Triangle often feel the presence of some energy force that can be either negative or positive. Nearly everyone who visits such places experiences something odd, enigmatic, some presence of unknowns forces.

Though it is assumed that strange and unexplained events have taken place in the region for a long time, Perm anomalous zone was officially discovered in the 1980s. The zone is located about 6 miles from the Molyobka village, which was founded in 1787. This remote corner is located at the confluence of the Sylva and Molyobka rivers. The area of the anomalous zone is roughly 45 square miles, is essentially comprised of dense forest.

One of the first observations of an unusual phenomena was reported in the summer of 1980 by Pavel Sergeyev, a local resident who witnessed how an object fell into a pond. It must have been a rather large and heavy object because the waves rose more than 30' above the water line.

In October 1984, Emil Bachurin, one of Russia’s leading ufologists who passed away in 2009, observed a purple ball that suddenly appeared out of nowhere from the forest.

Some scientists have suggested magnetic fields change the movement of the Sylva River, which then forms the mysterious triangle from all sides.

Russian researcher Nikolay Subbotin who has organized many tours to the Perm anomalous zone thinks many of the region’s anomalies are caused by electromagnetic energy that comes up from the lower layers of the planet.

For example, take the effect of a frozen sound, as we call it. It happens as follows:

You sit near a fire and hear a tractor coming. You wait for it to come into view but it never does and the sound subsides. Some phenomena cause inexplicable fear, when you walk along a path and suddenly get overwhelmed, as if the infra sound or some other thing affected your brain. You can come to the same place on purpose the next day and nothing happens.

There must be something there, either of the electromagnetic nature or some invisible objects indeed, Subbotin said.

People who visited the M-Trianle have experienced headaches, high temperatures and states of temper. Electromagnetic energy can also cause people to feel ill under certain conditions.

For example, Scientist James Beal has suggested that variations in the Earth’s magnetic field can trigger responses in the nervous systems of certain people who are particularly sensitive to such anomalies because of quirks in their body chemistry. Both animals and people can react to electromagnetic energy.

Perhaps the strong energy present in the region can also explain why this place was sacred to the Mansi people, whose ancestors populated the areas west of the Ural Mountains.

It is estimated there are about dozens of anomalous zones in Russia. Another very intriguing place is Arkaim that remains a scientific enigma and anomalous zone where strange things take place.