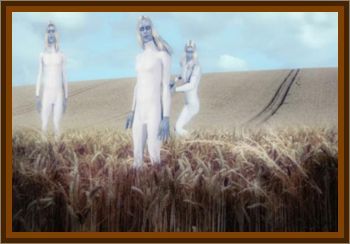 I want to tell you about a fact, which was repeated and told to us. That in the universe may be another civilized planet.

I took a girl I knew and drove her home. At the Davitashvili Street near the restaurant 'Samadlo'.

I saw that the water in the engine was boiling. I stopped the car and went to get water. When I came back, the girl wasn't in the car. I don't remember if I filled the radiator or not.

I started the car and drove ahead onto the Mtacminda park. As a rule, I drive that way home.

In the Mtacminda road, I saw a woman, which was trying to stop my car. I can't decide to stop or not and after driving 50' further, I looked back in the mirror and the woman wasn't there.

I continued on my way. I stopped the car near Mtacminda park and went into restaurant to see my friend but he wasn't there.

On that day, I didn't have any plan to see him. After 1650', when I drive back, my car engine suddenly stopped. I don't remember my car ever doing this since I have had it. I got out from car and rolled it back. At that time, I felt that some kind of invisible field was operating on me and was taking me somewhere. The road was dark. I was walking approximately 650', when I saw a Flying Saucer. It was standing to the left of me and had three legs. All around it were colored lights. At the bottom were stairs and illuminated windows.

From the saucer, 60' away were standing four figures. They were 9' in height. I wasn't scared, maybe because that hypnosis like force, which was taking me to that place, kept me from being scared. They also were not afraid when they saw me. One of them came close to me and tried to establish contact. I was trying to understand.

First, he was talking in this strange language. Then, he started talking in Russian. He asked how old am I? I answered. Next, he told me that they aren't the first here and they will come again.

He told me: We come when it is a necessity. He said that we are undeveloped and that we have simple primitive technology.

Next, I felt behind me a warm. I turned and saw that one of them was measuring my height. Talking to only one of them, I put my hand on my watch and gave a sign that it was late and I am in a hurry.

He asked: Do you have a phone at home? I answered, I have, but how can I call from here? He went into saucer, walked up gangway where the light was coming from. When he came back, he held a strange apparatus. The device was lit up with different colored lights and strange signs, which was like hieroglyphs. I understand that it was a phone and I dialed my home number. The voice that was coming from the apparatus and light, which lit up from the voice, understood me, that nobody was taking my phone call at home. Then he took the apparatus back without speaking. Afterwards, he came back and told me that they want to take us, I did't understand, what they mean 'us', that they want to help that they aren't coming with a bad intention. I asked, what if I come with you, will you bring me back. He doesn't answer because on the small transmitter, in my mind, it was a transmitter, all four had it on their breasts, was a lighted red colored bulb and I heard a low siren like voice. When he heard that signal, he went into the saucer and took me with him.

Inside the saucer, I saw TV like apparatus. I saw all of my body. The picture was color and clearer than on an X-ray set. I saw how my heart worked, my stomach and other organs. At that time, my interrogator came back. He told me that I was free and I can go home. I said my car isn't working. He calmed me and said don't worry, car will be OK. I came back and sat in the car. I saw how UFO pushes stairs in and lift into the air. Approximately at 200' altitude, it reduced speed and turned on its side and climbed into the air. I heard a low humming sound. The car started and I went to home.

On July 11, at same place, I saw a black spilled liquid, which has oil smell. I want to tell you that the liquid on the third day wasn't there.

Consequently after our meeting, they were there once more at the same spot and they stayed that time.