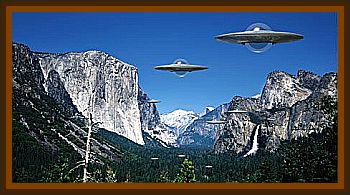 I have been seeing these things for about 4 years now, at first I didn’t believe it.

I dismissed them as balloons or paper blown in the air. Then after seeing them 6 or 7 times one month in late 2003 I had to accept that they were UFOs. They mostly come from the northwest, although not always. They stop and hover near were I live then move off to the northeast toward Scotland. I watched them for another year 2 or 3 a month fly past or hover for a few minutes.

The spheres I have seen are white mainly, although I have seen metallic, brown and blue types. The cylinders, I have seen 2 of these, are white plain flat at both ends and a lot bigger than the spheres.

I still had not spoken to anyone about these things. I have a wife and children and I didn’t want to upset anyone. I had no idea what they were, and I wasn’t certain of what I should do.

Then on April 4, 2007 I was helping my brother in law with some garden furniture. It was a nice spring day there was some cloud but mostly blue skies. I spotted a silver sphere away out to the east it was moving towards us.

I pointed it out to my brother in law and we watched it get closer, after about 2 minutes it was above us, and one of the best sightings I had, as you could see the reflection of the clouds bending around its surface. It had not stopped, but kept up it’s pace as it slowly moved into the west. I was delighted I had a witness as he saw it also. I wasn’t going insane after all. In my joy I called out to it:

As I did, it stopped. It didn’t come back but it scared us both for a second. What it did do is elongate and then divide in to 2 spheres, and then merge and disappear. After that I told my family and friends about what I been seeing. They were skeptical at first. I would tell them how they are up there most months and eventually they, my family and friends, would be with me when it happens.

So we have all seen them now. I won’t go into them all here, but the last sighting was a blue sphere very high up. I took some photographs.