Abducted While Hanging Out Washing 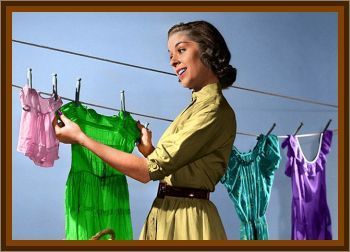 While hanging out washing in her back garden, a woman known Jane G. Doe, noticed a strange blue light descending straight down from above. It became stationary around 100' above her.

The light came down and enveloped her. Before she realized what was happening, she began to rise up from the ground inside the glowing beam. She found herself in a room with three beings across from her. She described them as tall, wearing tight, shiny metallic suits, and a balaclava type hat on their heads. She stated, although no one spoke to her, she was given the impression I would come to no harm.

The next thing she knew, she felt a sharp blow on the back of her neck, and she was standing in her garden again. A quick look at her watch revealed several hours had passed since she first left her house to hang out her washing, all of which, incidentally, still sat in the basket.

In the following days and weeks she was haunted by strange and intense dreams.