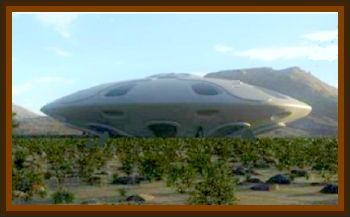 The Hawk Eye included a story from Mount Pleasant resident Clark Linch, 75 at the time but has since died, who related a story that took place in 1920.

Linch maintained that at about 10:00 a.m. on June 3, 1920, he saw what he later came to believe was an extraterrestrial spacecraft land while he was fishing.

Linch said he was working his father’s farm 6 miles northeast of town when he took the forenoon off to go fishing.

I remember the year because I’d gotten married in January of 1920, he said, adding he was able to remember the exact date because it was his birthday.

While fishing, Linch saw an egg shaped object the size of cream can land silently about 15' from his riverbank perch. The object sat there for about 15 minutes, not bothering him, nor he bothering it, according to the report.

I wasn’t in any hurry to jump up and run over to it, and I’m glad I didn’t. It might have killed me.

Just when I thought about going over to take a closer look at it, it took off without any sound and without turning around. The grass where it hit was pressed down.

Linch said the object left no damage or burn marks on the grass where it had landed. The blue and translucent object would have been camouflaged in the sky, I didn’t know what to believe about it at the time, and I still don’t. I’ve concluded that it wasn’t anything from Earth.

Because of the object’s small size, Linch had said:

It couldn’t have been occupied by intelligent life as we know it.

Linch observed that his sighting differed from other UFO reports because the object he saw moved slowly, probably about 4 or 5 mph, and was small and apparently lightweight.

You didn’t talk about flying saucers in 1920, he said.