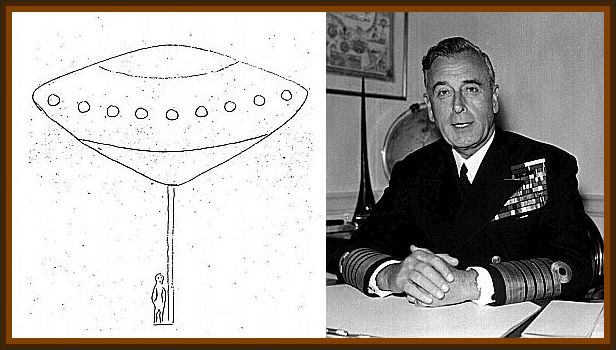 The late Earl Mountbatten, Prince Philip’s uncle, who served as Supreme Allied Commandeer in South East Asia during World War II, also held a deep interest in the UFO/Alien topic. Louis Mountbatten had allegedly seen UFOs up close. Although there is no documented evidence of this, there is a strange parallel with Prince Philip’s alien story during the 1950s.

Back in the 1950s Prince Philip was keen to meet the famous contactee, George Adamski, who claimed he had been taken on a tour of the solar system by aliens from Venus.

Frederick Briggs, a retired Sergeant from the British Army, was working as a maintenance man at Broadlands, the Hampshire home of Mountbatten. Briggs was either riding or wheeling his bicycle in the grounds covered in a light dusting of snow, when he reportedly saw a large craft that looked like a child's top hovering over a field. He saw a column descend from the middle of the object with what appeared to be a small, 5’ 6” tall, fair haired, humanoid wearing overalls and a helmet. On reaching close ground level the humanoid noticed Briggs observing his descent. Briggs was paralysed by a strange light beam whilst the humanoid retreated back into the craft.

As he arrived at the house, Mountbatten’s chauffeur noted Briggs, looked noticeably shocked. Being a good friend Briggs confided his amazing story to the chauffeur who concluded “You must tell the boss.” After some deliberation Briggs relented and met with his employer. Mountbatten produced a number of UFO photographs and asked Briggs if he could identify the craft he’d seen. Briggs recalls the Earl saying to him “we know about these things and are very interested in them”. They then went to site where a perfect circle of snow had melted in the ground underneath where the craft had been hovering. There were also markings in the snow where Briggs had slipped with his bike. Mountbatten took Briggs back to the house and asked him to write out a statement which both men signed along with a drawing of the craft by Briggs’. See links below.

Mountbatten states in his report that he personally interviewed Mr. Briggs.

He reported that Briggs did not give the impression of being the sort of man who would be subject to hallucinations, or would in any way invent such a story...I have personally investigated the above claim by Mr Briggs and I believe it to be true and correct"

The story was almost printed by the Sunday Graphic newspaper but pulled at the last moment when the editor changed his mind so as not to embarrass the Mountbatten family.

However this was not the end of the tale. In a discussion with Desmond Leslie something stranger happened to Briggs on the following day. Briggs was cycling to work up the same road to Broadlands when he encountered the blue uniformed humanoid, standing in the middle of the road, ahead of him. He stopped, shook the hand of the humanoid, he winced and explained, telepathically, that his race was not as strong as humans. Briggs was then invited into the spacecraft and sat down alone in a small compartment with a triangular window. He was then allegedly transported to his chosen destination of the Pyramids of Giza.

Briggs recalled the flight took all of about 10 minutes and he could see both above and the sides of the pyramid from the window. This somewhat confused him along with the whole experience only lasting around 30 minutes at most. Before he was returned to ground Briggs stated the alien said: “If Lord Mountbatten met us he could change the world.”

A rather bizarre statement when had they really wanted to contact the Earl they almost certainly could have done. It is odd that Mountbatten never admitted to seeing the craft or the humanoid(s) Briggs encountered on his grounds. Subsequently when Mountbatten was later told this second tale via a letter from Desmond to the Queen’s Private Secretary he dismissed it all as nonsense.

Mountbatten later met with Adamski in 1963 where he took him to the site of the Briggs encounter. It seems he strongly believed in the first story but, for reasons unknown, not the second meeting the following day.