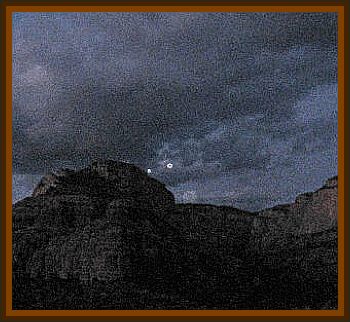 Walker AFB USAF Tech Sgt Raymond Bare was in a car in downtown Roswell when he saw a blue/green light, first star like then apparently round, at an estimated altitude of 20,000' to 30,000' and estimated distance of 40 to 50 miles over some low mountains east of Ruidosa at about 270º due west of Sgt. Bare.

The object traveled three times over approximately the same south to north, east to west swaying triangular course at a speed that seemed faster than a jet. Object ascended vertically to about 40,000' to 50,000' then back again to 20,000' to 30,000', elevation angles 10º to 5º at a descent angle of about 25º from horizontal.

Intensity of color brightness varied with the objects altitude.

Venus was on the other side of the Earth at the time of this sighting and could not possibly have been seen. Venus did not rise until about 4:30 a.m. in the east of course. Set about 5:45 p.m. in the late afternoon when it would not even be visible, Sun was over an hour from setting only about 12º from Venus and its blinding glare would have prevented it from being seen.