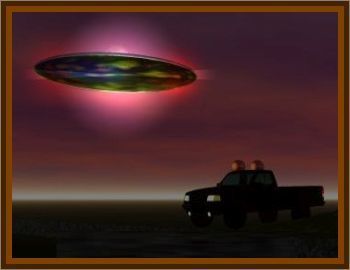 The vicinity around Moundville has been the location of a number of reported UFO sightings. One particularly interesting case came from a man who was certainly not seeking publicity and didn't want his name used in connection with the case.

This case occurred in October of 1976. The man had noticed that for several weeks his pickup truck was being followed by a bright object in the sky as he drove to and from work in the predawn darkness and after twilight.

About 9:30 one night he had closed his business and was headed for home when the object made a sudden dive for his truck. He reported to investigators that he panicked, pulled off the road and stopped under a tree.

The thing dropped out of the sky like a rock. Just when I thought I was about to be crushed, It pulled up just short of my CB antennaes, he told Investigators.

I looked up again and a light as bright as the sun blinded me. Then my CB died. It hasn't worked since then, he said. He threw the truck Into gear and raced off, glancing to the rear long enough to see the craft go straight up and disappear within three seconds.

He was unable to give any accurate description of the object, except for the lights.

He has decided they don't mean him any harm and has learned to live with them. He doesn't go outside at night.

Some cases have been explained, or at least a possible explanation has been put forth. For example, there was a case where two teachers were driving the highway between Moundville and Tuscaloosa before dawn in late 1977.

They noticed a bright object in the sky that appeared to be following their car. The women happened to have a home movie camera In the car loaded with color film and tried to shoot plctures of the UFO, although nothing showed up on the film. Planz investigated the case and later said he felt the this particular UFO was the planet Venus, which at that time was In a place in the sky where it would have been very large and bright. The eyes play tricks at night, and motion is difficult to determine.

More recently, Planz received a report about a woman who saw a glowing object go down into the woods just off the interstate highway between Birmingham and Tuscaloosa. That was the same night as the reported sightings all over the southeast of a bluish or greenish object that shot across the sky.

Astronomers have said it was probably a meteor.

Somebody else said it may have been a rocket someone fired in Mississippi. But no one really knows what it was for Sure.

What are the UFOs? The range of explanations are as varied as the inclinations of the human imagination. more selective in their readings on the UFO pheonomenom. Others envision it as political intrigue and possibility psychological warfare. Jimmy Carter, who went down in history as the first American president to admit having seen a UFO, directed the National Aeronautical and Space Administration, NASA, to look into the matter, although reportedly that agency was a bit embarrassed by the whole thing. They said they could find no evidence that UFOs were real. Planz feels their response to the president's request was improper. I think the suggestion by the NASA representative was not very well founded. He said that if we could come with some concrete evidence they would come up with a program. Well, if we had any concrete evidence, we wouldn't have to have a program, Planz said.

The newstands and book stores hold an array of publications ranging from the terse language of the scientist to the fantastic ravings of the lunatic fringe and Planz reads them all.

I've been reading and reading everything, even the trash, Planz said.

He cautions others, however, to be a bit more selective In their readings on the UFO pheonomenom.

One thing Planz is waiting for now is December. According to the predictions of Dr. David Saunders of the University of Chicago, a major rash of UFO sightings is to take place at that time.

Saunders has plotted all of the major sightings on a graph and by extrapolating, has predicted the previous periods of sightings.

He has been right twice now. If he is right the third time, there is something there we should look at, Planz said.

For those who have seen UFOs and wonder what they saw, and for those who wonder if there's really anything in the night sky to be seen, the waiting will have to continue until some kind of tangible and indisputable evidence to explain these objects has been found.

The potential impact of the solution to the riddle could be even more mind boggling than the riddle itself.