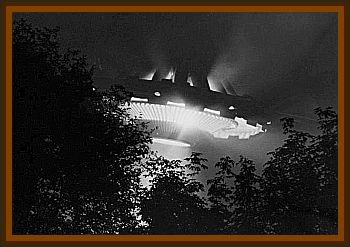 I just remembered something from when I was 16 years old. Me and my friends where standing outside where we lived, just talking and hanging around like teenagers do, when we saw 2 huge black oval shaped disks fly by at a pretty nice speed.

They hovered for a while and had maneuvers like nothing I have ever seen, with sharp turns and they were at an angle when they hovered.

Approximately 60° titled to each other when they stopped. I also remember that they had lights beneath them and that they where massive, maybe 500' in diameter. But they where huge and not that far up in the sky because they flew over us and we felt the drag when they passed. We just said wow and ran to the peak where they stopped. It was like a hill.

I remember that I have never run like that anytime and so fast .

The only thing is that this has burned in my mind and sometimes I see glimpses of that incident over and over again. Am I the only one that remembers this? I think that I will contact the base for some answers on their flight logs at that time. Maybe they have this in their archives if I am lucky.

Have a nice day my friend. It’s enough for me that I know the truth about this, but I wanted to share this anyways with someone.