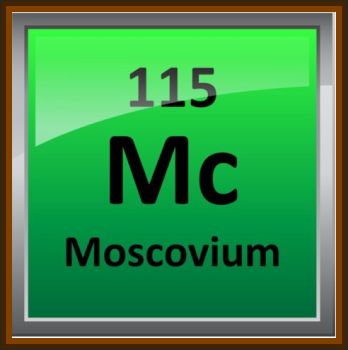 Does element 115, Moscovium, have anything to do with powering alien spaceships?

Element 115 is an enigma of sorts.

It was only added to the periodic table in 2016, yet for decades it has attracted extra attention because of a supposed connection to extraterrestrial technology and alien lifeforms.

Before we answer whether there is a connection, let's find out what element 115 really is.

Element 115, or moscovium, is a man made, super heavy element that has 115 protons in its nucleus, emails Jacklyn Gates, a scientist with the Heavy Elements Group in the Nuclear Science Division for Berkeley Lab in California.

As with all elements on the periodic table, the element's number corresponds to the number of protons in the nucleus of the element's atom.

That is 23 more protons than the heaviest element that you can find in large quantities on Earth, uranium.

Gates says that element 115 is an extremely rare element that's made one atom at a time in particle accelerators. It exists for just a fraction of a second before it decays into another element.

It is special because it is near a predicted island of stability where some super heavy nuclei might have much longer lifetimes.

Instead of living for less than a second, they could exist for minutes, days or even years. That is long enough that we might be able to use them for practical applications, she says.

Element 115 was discovered in 2003 in Dubna, Russia at the Flerov Laboratory for Nuclear Reactions by a group of scientists led by nuclear physicist Yuri Oganessian.

The element was eventually named moscovium because Dubna is in Moscow.

To make this element, the scientists accelerated ions of calcium-48, 48Ca, to around 10% of the speed of light and then bombarded americium-243, 243Am, with them.

Through this bombardment, they were able to successfully fuse the nuclei of 243Am and 48Ca atoms, says Gates.

To create a super heavy element, you need the complete fusion of 2 lighter elements, she notes.

This process produced 4 atoms of moscovium.

This new element was then separated from all the other reaction products using the Dubna gas filled recoil separator and then implanted into a detector where scientists were able to watch element 115 decay into element 113.

It took years for researchers to work out some of the details about moscovium.

It wasn't until 2018 that Berkley Lab scientists figured out that the element's mass or atomic weight, the total number of protons and neutrons in an atom, was 288.

To nab this vital number, they repeated the process that the first discoverers used to pin down the element. In doing so, they managed to produce roughly one atom of moscovium per day, and that atom was captured by an instrument called FIONA, For the Identification Of Nuclide A, which to the untrained eye looks like a small metal bank vault.

So far, moscovium doesn't have a practical use outside of scientific study.