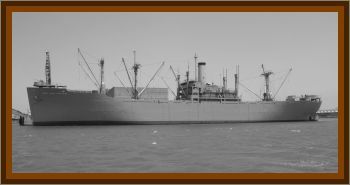 3 witnesses, the Third Mate, the Helmsman, and the Bow Lookout, of the Morgantown Victory (MCV-632) saw a cigar shaped object approach their ship. The object approached the starboard beam of the ship from the horizon and then turned almost 180° to avoid going over the ship. It approached the ship within 1 mile at an elevation of 400'. It hovered for 30 seconds, then crossed in front of the ship and made another directional change.

The object was described as being cigar shaped, glowing with an orange yellow color, with a bright glow on its front, a body with a duller glow, and a long fiery tail. The body appeared to have two lights on top. The length of the object was estimated at 200' to 250' and its height at about 35' to 40'. The object was visible for 3 minutes.

The Master of the ship thought that a plane had crashed in the ocean and he ordered the ship to turn to conduct a search. Two turns were made and nothing was found in the searches. Blue Book Conclusion: Satellite Decay, Cosmos 53.