2 Men Seemed Not So Friendly 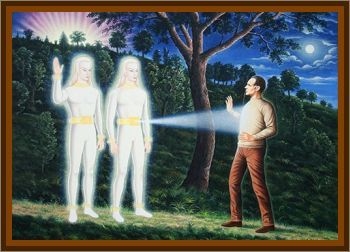 Pedro Morais, who lived less than a mile from Costa e Rosa, was preparing to go to a warehouse for supplies at 5:00 p.m. He heard a chicken squawking, and thinking hawks were raiding, he went outside to investigate. He could still hear the chicken, but could not find it, and never did, for he saw an object which he described as looking like the hood of a jeep, hovering just above the ground. The bottom resembled that of an enormous polished brass kettle.

Morais then saw two human forms in a cultivated field nearby and he started toward the craft, planning to register his displeasure at this trespass. As he did so, one of the men ran toward him while the other raised his arm in a gesture which appeared to be a warning to stop.

Morais, angry, did not pay attention and continued toward the machine.

The second man stooped quickly and pulled a tobacco plant out of the ground, then both of the beings got into the craft which disappeared into the sky within a few seconds.

This particular incident involves a new type of occupant. Although human in shape, they both gave the appearance of being enveloped in a kind of yellow colored sack, from head to toe.