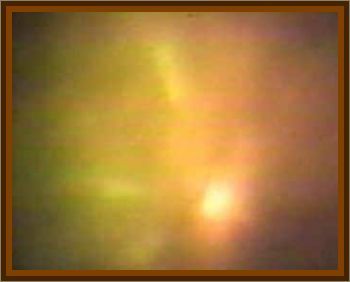 Witnesses reported a round, metallic object of about 1,800' wide over the rooftop pool of the Bonaventure Hotel. Eyewitnesses saw 8 - 10 lights forming into a circle above them, giving off bright white rays. The phenomenon lasted 3 hours, from 7:00 p.m. to 10:00 p.m., and moved slowly northwards. While no one could identify the lights, few, according to the next days report in La Presse, were ready to express their belief that they were visited by aliens. The day after the incident it was reported that a member of NORAD went to local police station and confiscated all written reports on the incident. They have yet to be released.

A woman spots something in the sky while swimming in the rooftop pool of her downtown Montreal hotel. She sees a round, metallic object projecting a series of brilliant light beams. Her sighting sets off a chain reaction. She tells the lifeguard who calls the hotel security guard, who contacts the police and a journalist from La Presse newspaper. The RCMP, the military and even NASA are called in.

The incident sparks sensation due to the excellent documentation and the large number of very reliable witnesses. Some theorize it is nothing more than the result of northern lights, dismissing the possibility of a UFO sighting. The event catches the attention of Bernard Guénette, a UFO researcher in Montreal.

In 1992, Guénette & Dr. Richard Haines, a former NASA scientist, publish a 25 page report on the sighting. The report concludes that the evidence for the existence of a highly unusual, hovering, silent large object is indisputable.

Here is the story from the first person to spot the UFO:

On November 7th, 1990 I was the first to report what turned out to be the largest UFO sighting in Canada.

I was at that time the lifeguard at the Hotel Bonaventure in Montreal. The swimming pool was on the roof. I noticed a woman who was floating on her back, motionless, for about ten minutes. I went to her to see if she was all right. She just pointed silently up to the sky.

When I first saw those lights I was stunned. They were very bright. I first saw yellow lights, I would say six, seven, or eight spots, within the shape of an egg.

It didn't move an inch, from what I could see.

Everywhere I moved around the roof, the thing always seemed to be right over my head. I said:

Somebody pinch me, because I don't believe what I see.

I called the hotel manager and rumors spread like wildfire through the hotel. The police arrived and called for help when they witnessed the overwhelming display of lights and the large crowd that had gathered.

Photographers were taking pictures and the TV people were there, too. The lights now seemed to be a coldish white, almost bluey, and incredibly bright and sharp, like pencils of light.

After approximately two hours and fifteen minutes they began to move slowly from the West to the East.

When they were far away they still resembled a shape or formation, like a glittering crown in the sky. It was really something to witness. It will always stick in my memory as something strange and very exciting.