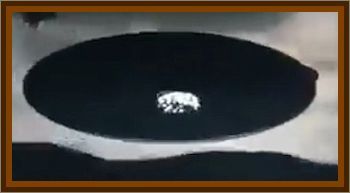 I am only a young adult with a keen interest in the supernatural, mainly cryptozoology, and while I have never really had an interest in UFOs, a story my grandfather told me did happen to pique my interest enough to consider it worth sharing.

My grandfather is relatively young, and still sharp as ever. He is currently retired and living in the Mid-Atlantic, but he was born and raised in the Green Mountains of Vermont. In the 70s, he worked as a police officer in the capital city of Montpelier.

Just after dark in the fall of the mid-70s, my grandfather was on Interstate 89 on his way from Montpelier to Burlington. As a cop, he knew just about every major project in that relatively small and unpopulated state, so he was surprised to see some sort of construction project on the side of a small mountain.

He could make out a huge dark shape, which at the time he presumed was a small mountain, covered in bright lights, slightly obscured by the unusually hazy air, considering the time of year. Since it was October and the Vermont ski season was fast approaching, my grandfather believed it was construction of a new ski resort. He pulled over next to around a half dozen other motorists who were trying to see what was going on but he couldn’t figure out exactly what it was. It did not make any noises louder than those coming from the highway behind him.

The next day, on his way back to Montpelier, he pulled over at the same milepost so that he could get a glimpse of it, but to his surprise, there was nothing there. He looked around, and was able to locate where he stopped the night before, but this time, the mountain had vanished, and there was no sign of it anywhere. To this day, he claims that what he saw that night was a massive UFO that had landed among the Vermont countryside.