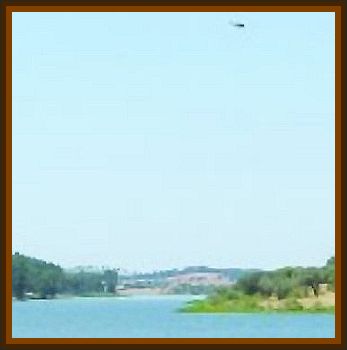 A UFO was photographed in Monte Novo between Reguengos and Evora on Monday, May 31, at approximately 2:30 p.m.

4 people at the site, 2 engineers and 2 students, did not notice the presence of the object until they checked the images picked up by the digital camera. Eduardo Silva, 25, of the Instituto de Soldadura e Qualidade, ISQ, took the photo as he performed a water quality survey on the waters of Monte Novo, Vigia and Caia.

I didn’t See anything strange, I only noticed it when we saw the photograph. That’s when we started saying it was a UFO, but I only gave it importance when I saw the news, explained Eduardo Silva. It was very hot and there were no birds about, or balloons or helicopters, said the author of the photo.

CM reported on last Thursday that the Portuguese Air Force had followed the tracks of a spindle shaped” object which had crossed the national air space. On Monday, Colonel Barbosa of the Armed Forces High Command explained that they were currently cross checking information from the radar images and eyewitness accounts.

The officer said that:

If possible any news would be made known shortly.

The photo provided to CM shows no signs of tampering. The reflection of the sun on the apparently metallic object agrees with the shadows of the trees shown in the photo.