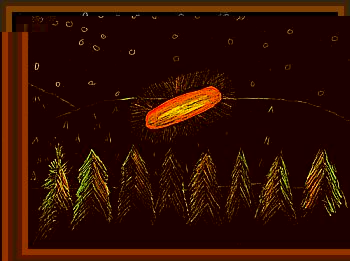 We were a bunch of kids playing soccer in front of my house in the afternoon. Someone stopped the ball and pointed to the sky 100º from our position.

A huge cigar shaped object was flying very slow just a few feet above the jungle on the opposite side of the only airport in that town.

The object was a glowing orange color, it did not emit sound or produce smoke.

We did not know exactly what it was but days later a more inportant sight happened in the center of the town, I reamenber seen people praying as they were afraid for their lives.

Few years after moving to Belem, my uncle who was involved in a UFO research named Operacao Prato, or plate operation explained what the objects realy were.