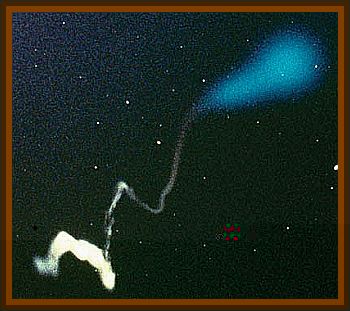 A schoolteacher claims having seen an object crossing the sky from west to east, with the apparent size of an apricot, and it had a blue tail.

J.A. Garcia, Montamarta, A high school teacher from Benavente was greatly surprised when by the appearance of a glowing dot of light that crossed the skies from west to east and which in her opinion was an unidentified flying object, a UFO.

She witnessed the glowing element between 7:30 a.m. or 7:45 a.m., when she approached the town of Montamarta on her way to the school in Benavente.

It was a fixed, fiery light that spouted something like little flames and had a bluish tail, she said. She stresses that the surprising apparition was perfectly clear because the night was dark and the light could be clearly seen. Furthermore, the object plowed the skies alone, without any stars lighting the cosmos over the landscape and could lead to a mistaken perception or be a shooting star. It was a luminous object about the size of an apricot and it moved through the firmament at low speed.

The teacher addes that it turned off before hitting the ground. It wasn’t lit when it fell.

In spite of this, she doesn’t know the area in which it landed. When she discussed the event in the Benavente school, she was even more certain upon learning that another co worker from Manganeses de la Lampreana had also seen it with no less surprise.

Guardia Civil sources consulted in this case reported not having any awareness of the apparition or having recieved any calls making them aware of it.