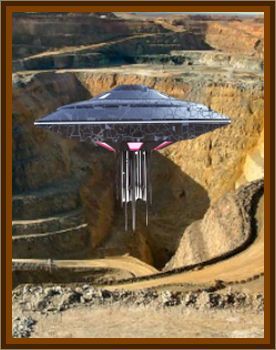 Buzz Montague often hunted in the area of the Spring Creek Mines which is near Spring Creek Ridge in the Sellway wilderness.

He first observed the objects in the early 1960's, he cannot pinpoint either the year nor the exact date. His last sighting was in the fall of the middle 1960's in the company of his friend, William Andrews. Both sightings were approximately the same.

The two men were camped on a bluff overlooking a valley. When they awoke at about 6:00 a.m. they noticed a shiny spot on the ore dump of a Spring Creek Mine across the valley. Neither took particular note of the time as they were engrossed in looking at the objects. Using the 10 power scopes affixed to their rifles, they observed the shiny object which actually was one of 4 which were hovering over the ore dump.

Protruding from the top of the objects were 4 hose like devices which were inserted into the slag piles and were moving around.

After a period of time, one by one, the objects elevated and ascended into the air, where a large object hovering at about 1,000' above the terrain, was spotted.

An elongated, cigar shaped object, it had 4 depressions on its underside. When the small objects reached the object, they fitted themselves into the depressions after which there was no indication that there had been a depression there to begin with. After another short period of time, the objects detached themselves from the cigar shaped craft and returned to the slag heap.

The two men were so engrossed in what they were watching that they made no attempt to note the time, but later estimated that they had watched the objects for approximately 45 minutes to 1½ hours while they made 4 trips from the slag heap to the craft hovering overhead, at which time, they remained a part of the large object as it moved slowly to the northwest and out of sight, ascending all the while.

One other detail which is noted in artists drawings of the UFO, is the transparent dome atop the disk shaped objects on the slag heap. The artists rendering was done via mail with Mr. Montague okaying every detail. All of the craft were silvery in color and windows or ports were visible on the large one, as indicated by the artist.

It might seem logical to assume that the objects in this instance were engaged in mining operations, but we should note that the areas being probed were slag piles, in other words, certain materials deemed important to mankind had already been mined and removed. If the objects were engaged in pure research, they could have been engaged in an attempt to determine the type of ore which had been extracted.