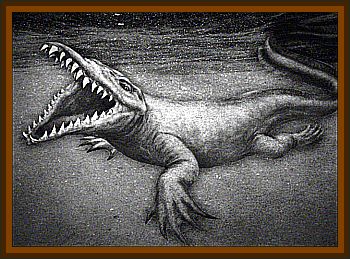 The myth originally grew from articles written in the 19th century by Joseph C. Rich, a Mormon colonizer in the area, purporting to report second hand accounts of sightings of the creature. However, he later recanted the stories.

In recent years the monster is considered to be a tourist attraction. The last reported sighting of the monster was in 2002.

Not all descriptions of the Bear Lake Monster agree, but one team of folklorists stated that it is reported to resemble a serpent, but with legs about 18" long on which it marauds along the shoreline.

One article reported that the creature had a large undulating body, with about 30' of exposed surface, of a light cream color, moving swiftly through the water, at a distance of three miles from the point of observation.

Others reported seeing a monster like animal which went faster than a locomotive and had a head variously described as being similar to that of a cow, otter, crocodile or a walrus, minus the tusks. Its size was reported to be at least 50' long, and certainly not less than 40'. Some sightings even spoke of a second member of the species and smaller monsters as well.

An 1868 article in the Deseret News announced that:

The Indians have a tradition concerning a strange, serpent like creature inhabiting the waters of Bear Lake.

Now, it seems this water devil, as the Indians called it, has again made an appearance. A number of our white settlers declare they have seen it with their own eyes. This Bear Lake Monster, they now call it, is causing a great deal of excitement up here, and then the author, Joseph C. Rich, went on to relate several sightings of the creature in recent times.

The article created a stir in Salt Lake City and within a month a news staff member, quizzed many Bear Lake people and found hardly a person who doubted it.

LDS Church leaders took an interest in the monster and when they visited the area on preaching tours, took the opportunity to speak firsthand with the residents of the region. They stated that they had conversation with brother Charles C. Rich and other brethren from Bear Lake Valley, respecting the monster which had been seen in the lake and found that they declared that the testimony that had been given by so many individuals, who have seen these creatures in so many places and under a variety of circumstances that they, the locals, considered the story to be indisputable.

The Deseret News continued to publish articles about the Monster, skeptically at times and defensively at others, while other local newspapers turned to attack the stories of a water devil. The Salt Lake Tribune even went as far as to quip that the Monster was twin brother to the devil and cousin to Brigham Young.

Articles about the Bear Lake Monster continued to appear over the next several years, either reciting new sightings of the Bear Lake Monster as well as similar creatures in other rivers and lakes in the Utah Territory or calling the sightings into question. The number of alleged appearances of lake monsters all across northern Utah caused some people to speculate that there was an underground channel connecting the Great Salt Lake and other waterways to Bear Lake.

Interest was high enough that at one point even LDS Church president Brigham Young decided to investigate the claims to find out whether the story was an honest tale of a serpent, or only a fish story and went as far as sending a large rope to Paris, ID to aid in capturing the monster.

Young wasn’t the only person interested in capturing the creature. One local resident proposed using a large baited hook attached to a 20' cable and 900' of 1" rope, at the end of which was a to be a large buoy with a flagstaff/pole inserted and an anchor to keep it in a perpendicular position. From the buoy one 300' of ¾" rope was to be extended to a tree on shore.

When captured, it was hoped that the monster could be exploited for its wondrous proportions in the show business, in competition with the famous P.T. Barnum.

Interest eventually died down in the subject and the phenomenon faded from public memory. 26 years following his articles and allegations, Joseph C. Rich finally admitted that it had all been a wonderful first class lie.

Sightings of the Bear Lake Monster continued even after Rich admitted that he fabricated the original sightings as a hoax. A 1907 letter published in a Logan, Utah newspaper claimed that two men had seen the Bear Lake behemoth attack their camp and kill one of their horses, a 4 year old claimed to see it in 1937, and a Boy Scout leader spoke of seeing it in 1946. The last reported sighting of the monster was in June 2002, when Bear Lake business owner Brian Hirschi claims to have seen the monster.

The monster has become a part of local folklore, partly due to sporadic sightings and partly in jest. For years a Bear Lake Monster Boat, a tourist boat shaped to look like a green lake monster, offered a 45 minute scenic cruise of Bear Lake with folklore storytelling. Another self parody that the locals have done is to fill a float in the Garden City, UT Raspberry Days parade with local children and label it: The Real Bear Lake Monsters. On another occasion, during the 1996 Raspberry Days, a competition was organized in Garden City to have local school children name the leviathan. The judges decided on the name Isabella, which had been submitted by an 8 year old girl.

The Bear Lake monster also appears in Animal Planet's Lost Tapes, drama series, in which it is depicted as similar to a crocodile or a mosasaur. Lost Tapes also states that in one legend Pecos Bill fought the monster for days until he finally defeated the creature. The show also included a group of girls who were staying over in tents beside the lake being attacked.

Most recently the search for this creature was the subject of SyFy Channel's Haunted Highway Bear Lake Beast; Vergas Hairy Man. During which investigators found a cow bone in a submerged cave, springing questions of how the bone arrived there.