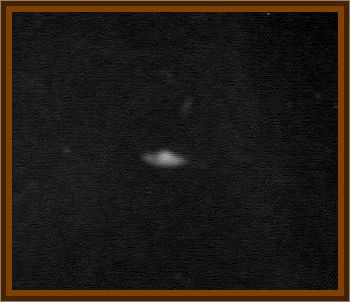 In northeastern Indiana, near the Michigan border, six men were sitting around a campfire, when, according to a Michigan Department of Natural Resources fire supervisor identified only as J.K., they saw:

Something glowing through the treetops that moved right out from behind the trees and into an open area near a road and hovered toward us. And it was clear as can be. It was a flying saucer, just that vivid.

One of the 6 managed to take a photograph of the object.

Although a blimp was reportedly in the area that night, an investigator from the Indiana chapter of the MUFON, looked into the report and determined that the aerial object photographed cannot be positively identified at this time.

It remains a UFO.