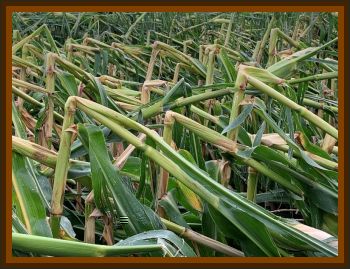 I was lying on my bed, it was dark when all my senses, hearing, sight, started to accelerate.

I had the feeling time sped up, outside noise also accelerated, everything felt fuzzy and I felt dizzy. It stopped after a few minutes and then I checked my clock and felt like too many minutes have gone by comparing to what I felt from the last time I checked it. It isn't an alien encounter perhaps but something weird happened that I can't explain and it occurred 2 times, only at night.

My mother had a more impressive and scary kind of encounter:

She lives with my grandma in a very small country village.

One night around 11:00p.m., she looked outside and saw something like a human shape darker than the outside darkness in the middle of the 15' x 15' corn crop she planted in the garden. Corn crops were around 4' tall.

She got scared and called grandma but the very dark shade disappeared and she didn't go out to check.

The next day, she went to check the corn crops and found the crops were somehow bent in a way that no human could bend them. She tried to bend one very gently or with an object but the corn would break every time, whatever the method.

So something/someone bent those crops, it's like they were heated bent and then got cold and stayed that way.

Try to bend corn crops without breaking them with no sophisticated Tech.

There is more to the story, the neighbors all said their corn crops were bent too, the event took place right in the middle of their plantation too.

Now, wind or tornados don't exist in the area but even if so, tornados apply the same force that our hands apply and would break the crops as tornados usually do. Plus the weather was calm.