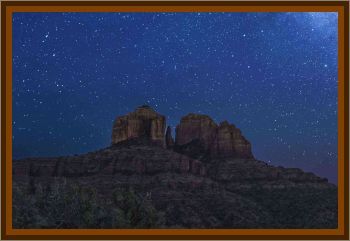 My 4 year old daughter and I take my new Volkswagen Bug on a trip to the Midwest where I have family. I left about 3:00 a.m., loaded with Auto Club maps and made Flagstaff late that night staying at a motel. Early the next morning I stopped for gas and information. The attendant said I could save time if I took the Navaho reservation Route 160 through four corners, up to Wolf Creek Pass, and down to Denver, instead of Route 66. I saw on the map we would see some of the Painted Desert. It never occurred to me that I might be going into a wilderness desert, without homes, or cars. So when we came to a Indian gift shop, where I bought a Zuni wedding ring, it made me feel better.

About 11:30 a.m. I came to a tiny cafe, just past the right turn to Farmington, where we ordered hamburgers and I drank 3 cups of coffee. The cook told me he had been passing through and stopped for coffee and the Indian owner asked him if he ever wanted to own a cafe. When he said he might the Indian gave him the key!

We paid up and headed through the lovely Kayenta Valley. About 2:00 p.m. I nearly went off the road sound asleep. I had to stop, now! I pulled over with no shade, rolled down the windows 2", and told my daughter to take a nap and not get out of the car! Then I was out!

At 3:30 p.m. I awoke with my body laying over the wheel and my arms hanging down loose. My girl was curled up on the passenger seat asleep! I looked out the windshield and approximately 200' off to the left of the road was a huge silver saucer, the size of a football field. It was hovering around 30' to 40' in the air, with the back tipped up so I could not see the bottom. Completely round it had a flat lip around the middle, with a streamlined dome on top!

Neither a window or door showed and I sat there and stared at it for maybe 6 - 7 minutes. I was interested in aircraft before I married and I wanted to learn to fly. This was not from this earth. I started to realize what I was seeing and became scared. In my mind, I heard someone tell me Do not be afraid. When I saw the HUGE Mother Ship I felt like I had been given a happy drug because I felt elated when I came too. When I was in the car looking at the Mother Ship I heard, in my mind, something that said, Do not be afraid. I believe they have the ability to communicate over a distance. I do believe I was taken and that the aliens were the cause of me passing out while driving. It has never happened to me again, only that one time.

Now mind you, I have some strange memories while a child but this was in broad daylight and I was wide awake. I was ready to get out and walk towards the ship when it took off for the lower Rocky Mountains. In a flash it was gone at a speed our earth craft could never match at this point. Just before it disappeared it looked like it covered 2 of the smaller mountains. It was only then that I started my car and took off again.

I looked for the ship all the way to Cortez where we stayed that night. Both of us were sick at this point and my daughter had a purple red rash on her chest. We were sick and not eating for a week. I felt weak and knew I must make the Midwest soon, so I drove hard and fast. We stopped at a friends home in Colorado Springs. He knew we were sick but I never told him about the ship. I never told anyone for years about what I saw. The sickness lingered for about another week.

I believe, or rather know, that we are visited by other beings in the Universe. They are way ahead of humans. They could be a million years ahead of us. There could be many types of beings. For me it was the chance of a lifetime and truly my moment on earth, that I will never forget. The vision is burned into my mind and has changed the way I think.

My sighting in 1969 changed not only my life, but revived old deep memories. When still in my crib I remember little men at the end of my bed. I told my mother, and she said they were Angels. I was scared. I needed a light in the hall until I was about 23. When I was 16, I remember seeing an owl looking at me while camping and laying down to sleep.

When married I saw a tiny big eyed bald man looking at me through the back picture window. We lived in the woods and I rarely closed the drapes. I woke my husband and he went out back to check and said there were no footprints in the new snow. It was January 1956, and my daughter was born in March.

Aliens float. I knew what I saw because I was wide awake at 10:00 p.m. Married, I would lay in bed and look at the ceiling waiting for I do not know what to come and get me. I knew.

In 1967 went to Hesperia, California and felt the need to go out in the desert. My car wouldn't start at one point, it stalled and I lost time. That's just a few things that happened before the Mother Ship.

In 1978, I was living in my house in Lakeside, CA. At 2:00 a.m., I wanted a glass of water, so I walked out of my bedroom and into the hallway. At the far end of the hall was the kitchen on the left and the living room on the right. To my amazement the living room was lit up like Christmas. Floating away from me was a being only 4' in height. It had long slender arms and moved them rhythmically up and down as it moved further down the hall. The being had 4 fingers, and was floating away from me. Its head was very large and it appeared to be wearing an illuminated headband.

The alien turned its body towards the wall adjacent to the bathroom and thrust its elbow through the wall. When the elbow made contact, blue, then red sparks flew. Then the aliens entire body disappeared into, or through the wall. I can't remember if or what I did next. The next morning I told my kids I had seen a ghost. The entity I had witnessed wore an illuminated headband, so I thought, believed it was a Indian spirit.

While playing bingo at an Indian reservation I saw a 50' saucer. 25% of the ship was covered with a very white fuzz that was too white to be a real cloud. Then I saw a rust colored saucer on the ground near San Diego, but I was on a bus and unable to stop. On January 1st, 1990 at 11:00 p.m. near Alpine, a ship came down over my car. It was a foggy night but I could tell that the bottom of the ship was bright orange, as if it was on fire, It was approximately 50' in diameter, and the thought of exposure to possible radiation scared me. I took off like mad and raced home to San Diego.

I have awoke to find strange marks and bruises on my body and grass on my feet. I do not sleep walk. I believe, when I was abducted that I have resisted because, I've had small two finger size bruises on my arms near my shoulder and I could tell which direction pressure was applied. I believe I have implants up through the right nostril, one in my right ear lobe and one in the scoop mark on the back of my right leg near the inside of my knee. That one bothers me at times with a burning sensation and I think my body is trying to get rid of it as I can feel something there. I wish I knew a MD. and a hypnotist in the St. Paul area I could trust. I would be very interested in a device that would stop abductions and I would buy it now. I need one for my daughter too.

I have seen 4 ships in Minnesota. One over Lake Elmo at 11:00 a.m., one over White Bear Lake that had cherry colored red lights that brightened than dimmed, one over Hastings at 6:00 p.m., and the last sighting was on my birthday, Jan 27, 1997, over Bloomington. Every sighting was unique. Although, I am no longer frightened by the abduction experience or the sightings, I do not consciously consent to these excursions into my or my familys personal lives.

I had an LA Times reporter contact me and to tell you the truth I'm a little scared of some of the things that have happened to well known abductees. I took Sodium Pentothal for 2 different operations and had the doctors ask me a few questions while I was still under. Have you been abducted by Aliens? Did the Aliens put an implant in you? Has this happened a lot? My answers were yes to all. They couldn't ask questions when they first knock you out because they put you on a respirator, but just before you come too they can do this and it works like a truth drug. I really upset one doctor with my answers and he came to me afterwards and tried to convince me it wasn't a truth drug.