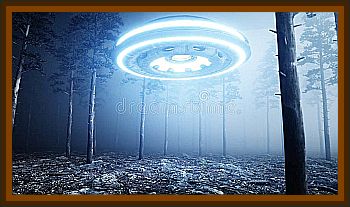 I was on my way to college with my mother and 2 of her friends she was taking to work, as she was as well in Orange, Central West of New South Wales, Australia.

We lived in a small town called Cumnock and had to past through Molong on the way to Orange, northwest of Orange.

I was sitting in the back seat of the car heading towards Orange, about one third of the way past Molong towards Orange when, while looking out the window to my right, towards the oposite side of the road here, I noticed a bright shiny object, very large, if you weren't looking you would not notice them, it was saucer shaped with a dome on top, along side of it on the left was a very tall person dressed in an outfit which glowed the same as the ship.

About the center of the craft and walking towards the road, the ship was about 80' away from fence line which was about 15' from the road, till he was about half way between the fence and the craft, and another one was standing on the right of the ship near a dead tree, both had the same clothes on, if you could call it that, with like black visors for their eyes to look through, it was like absorbing the sun light but didn't reflect it.

The closest I can describe it is like having a fluorescent light on outside in sunlight, but brighter looking.

They where very tall, I would say at a guess about 8' tall.

Mind you I was young at the time, but I see it now as if it was only yesturday, and in slow motion. It may have only taken 10 seconds from the time I saw them to the time we drove past, maybe less.

It looked like they where collecting things and looking at the cars going past, I am sure the one walking down to the road saw me as he turned his helmet and followed our car with his black looking visor. I never said a thing to anyone becuase by the time they looked around we would have past them and I would have been told not to lie.

I know what I saw, and to this day can show exactly where they where. Although the road has been changed, I am sure last time I was past there the road had not been widened on that side of the road.

I have always believed in UFO's since I saw this even though some people I have told never believed me, I only say this now becuase I want someone to tell who will believe me and get it off my mind at last. I am sure if the area was tested even after all this time it would show signs of something being there. The craft looked like it would have been twice as high as the men and about 6 times the wide/length.

And parked between two dead trees, I remember the detail so much becuase I had stared at it from the second I saw it, just before we got to the corner, until we drove around the corner, so it may have been more than 10 seconds.

I made sure I got as much deatil as possible. I did have a plastic camera in the car but it was no good.

I dont know if anyone else saw it as I never asked, someone else driving past would have seen it if they looked in that direction.