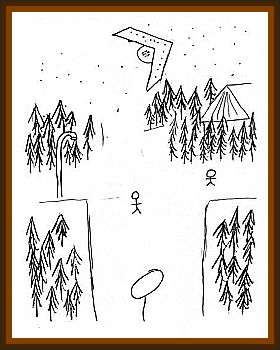 In the late afternoon a man came home from work to find that his daughter was very excited to tell him about a strange sight that she and others had seen early that morning. The event occurred while several youngsters were walking to catch their school bus in this rural subdivision.

Having an interest in the UFO subject as well as a career in the aviation industry he asked his daughter to write down as well as draw a description of the event. His daughter’s drawings and her description in point form follows:

I looked up out of curiosity.

I then saw the blinking lights out of the corner of my eye.

I saw a massive, wing like thing, slowly flying over, southeast.

I thought it was a commercial plane because of wings, then realized the level of its flight was completely abnormal to a normal plane of its size, just above the trees.

The lights had no pattern, referring to the blinking, the ones along the wings just twinkled back and forth.

Cluster of lights on the bottom, I didn’t know exact structure, very dark.

I saw it for about 12 seconds.

All I know is that it was not a plane she added as an ending note.

The mother who also worked in the aviation industry was equally perplexed at her daughter’s sighting, especially after seeing the drawings. The lighting configuration looked like that of no known aircraft, to either parent. They believed their daughter who said it was not a plane. Furthermore, their children have grown up around airports and know what conventional aircraft look like.

On March 11, 2002 I had the pleasure of interviewing the main witness at the location of the sighting. She had her facts straight and was sincere when recounting what occurred approximately 3 months before. Other details of the event came out.

For instance, she remarked that she ran the remainder of the way to the bus stop and that the bus immediately pulled up as she reached the intersection. The bus was facing the same direction as the UFO was flying and she was still observing the lights flying slowly away as she was boarding the bus. Inside the bus, her view was obscured and she no longer could see the lights. This begs the question;

Did the bus driver see anything?

During the time when I was standing with her where she first spotted the UFO, Air North’s Hawker-Siddeley, A 44 passenger twin engine aircraft, flew overhead at about 1000'.

It was quieter than that, comparing it to the sound of the UFO that appeared to have been just above the tree tops. I asked her to show me with her hand the size of the UFO above the trees, this turned out to be between 6" to 7" at an estimated 2' arm’s length distance.

A 67' long Hawker-Siddeley at arms length at 1000' would only appear to be 1½" long. What ever she saw took up a significant portion of sky, the way only a low flying aircraft would, yet it was much quieter. In other words the volume of the sound it made was inconsistent with its angular size in the sky.

It sounded like it was far off, yet she states it was just above the trees.

The young woman’s sister was further back behind and just around a slight bend in the road and doesn’t recall much detail other than some lights over the trees. An attempt was made to interview the other witnesses but they were not interested in speaking about the incident.

However, one of them confirmed that they did see something.