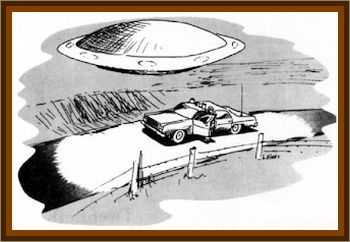 Madison County Sheriff's Deputy Kenneth Creel & Constable James Luke were on a routine patrol, when they witnessed a 30' - 40' UFO which approached them at close range. The thing came right over the car, ...The thing just hovered over us, about 20' or 30' up, for more than a minute, said Creel.

Since he reported the incident to the Mississippi Highway Patrol that evening, Creel has now found even more national attention focused on himself. I know I'm not crazy, I've always said I didn't believe in this stuff, said Creel. I don't know what I saw, but I know I saw something, It's just hard to describe what happened.

Deputy Creel first saw the object while driving down the Smith School Road 4 miles west of Flora, near the county line. He was with Constable James Luke at the time. It looked like an evening star or something, said Creel, but it kept getting brighter and bigger. Then, when the shape of the object began to form, Creel said he contacted the Mississippi Highway Patrol with his car radio equipment. I kind of thought it was an airplane flying low, or like it could have been. But when the strange object came within about 200 yards of his car, out across the field, then, Creel said, I stopped and cut my engine and my lights to listen. What he heard was a whirring noise, like a blender...Like it was straining, when you first put ice in it. And then the UFO started coming closer. The thing came right over the car, said Creel. It came right to us, like it was being piloted. How the thing got there is another question, because Creel says he could not tell if anything or anyone was inside. The thing just hovered over us, about 20' - 30' up, for more than a minute, who at this time was looking straight up, from his patrol car window. I didn't get out, I wouldn't.

According to Deputy Creel, there was little way to tell much about the craft. There was light coming out from little windows. And the light apparently changed colors several times, from soft blue to red to green and other colors. The UFO was reportedly about 30' - 40' in diameter, and perfectly round. It didn't spin or anything. It just hoovered around there.

After about a minute, Creel began backing up his patrol car about 100 yards, to a place where I could turn around. By this time, however, Highway Patrolman Louis Younger drove up in his patrol car within a short distance of the UFO, and reported seeing the same object, with the same description Creel had given. Then the thing just picked up and took off, north west, toward Satartia. An unidentified object of the same general description was reported the same evening by other Flora residents, and Deputy Charles Bowering and Highway Patrolman Joe Chandler and others said they saw lights from an unidentified craft from a distance.

There have been no more reports, but dozens of inquiries have come to Creel and the Sheriff's Department for further investigation. Some are real cranks, according to one department official. Others, apparently are more serious investigators. But as far as Creel is concerned, he would rather not have the attention. If I had known how much trouble it was going to cause, I wouldn't have reported the thing in the first place, he said from the Sheriff's Office last Friday. And moments later the telephone rang. It was another radio station wanting to talk to Deputy Kenneth Creel, The Madison Co. Herald (Canton, MS), Feb. 17, 1977.

One of the most famous UFO sightings in the world happened in Mississippi. Nearly two dozen law enforcement officers witnessed a giant floating object above the tree line in a cotton field off a rural Madison County road near Flora. A former deputy who said he saw the UFO told his story to WAPT's Darren Dedo. The deputy wanted his identity to be protected, so for the story, Dedo called him Joe.

I'll tell you what though, most of them around here, you don't realize how many people have had a close encounter with what this is, Joe said. It was approximately 15' - 18' off the ground, blue in color, kind of metallic blue, portholes around the center of it, shaped like an old spinning top kids use to use. Madison County sheriff's Deputy Kenny Creel was also there that night. His description of what happened made the Flora incident world famous. Three decades later, his cousin, Michael Creel, said the deputy is tight lipped about it. He didn't really talk about it anymore. He said if he knew it was going to cause such a ruckus, he would have never said anything about it, Michael Creel said. Dedo spoke with Kenny Creel about the UFO he supposedly saw some 34 years ago. He didn't want to go on camera, but he did tell Dedo by phone that he actually made the whole thing up. That it was some kind of a joke. But, others aren't so sure about that.

Joe believes Kenny Creel clammed up after the feds put the heat on him. The CIA told him that he didn't need to talk about it no more, Joe said. They didn't want it out. I'm not sure what kind of threats were made.

Local UFO researcher Patrick Frascogna has launched a new investigation of the 1977 Flora sightings. The initial sighting was Kenny Creel's & James Ray Luke, Frascogna said. These are credible witnesses in law enforcement. Joe said people are still seeing UFOs around Flora. In January, he took a picture of something in the sky. He said the sightings are a town secret. It's one of those things folks just don't like to talk about, Joe said.