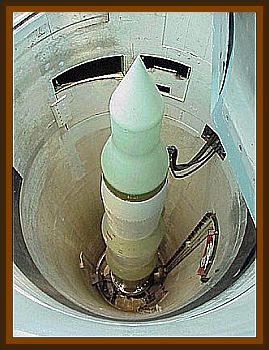 This incident has previously been documented by UFO Researchers.

In 1966, I was involved in an incident while stationed at Minot Air Force Base, North Dakota. I was told to never speak of the incident again, and also told that as far as I was concerned:

I was a Minuteman ICBM Launch Control Officer, a First Lieutenant, and a Deputy Missile Combat Crew Commander in a two man Launch Crew with my crew commander who held the rank of Major. I was attached to the Strategic Air Command, and part of the 742nd Strategic Missile Squadron, one of three squadrons of the 455th Strategic Missile Wing based at Minot.

I held a Top Secret clearance, which was required for my job.

It all began one morning when I was watching TV while having breakfast, and I heard the local news announcer mention that some residents in the town of Mohall had seen strange lights overnight, which they attributed to a UFO.

This caught my attention because I was scheduled for duty that morning at a Launch Control Facility, called November Flight, about 3 miles west of Mohall and about 37 miles north of Minot Air Force Base.

I lived in the town of Minot at the time, and I drove to the airbase to attend the morning Pre-departure Briefing at Wing Headquarters, where all 15 missile crews would normally meet each day prior to pulling alert duty at their respective Launch Control Facilities.

During the briefing, it was mentioned that some missiles at November Flight had gone off alert during the night, but no further information was provided. I immediately connected this to the news item that I had heard earlier in the morning regarding a possible UFO sighting near the town of Mohall.

When the briefing was over, several of the launch crews seated near me commented about the news item, which they had also heard that morning, and there was speculation about a possible connection with November Flight.

My crew commander had also heard the news item, and we were both anxious and curious about what we might find as we drove out to the Launch Control Facility.

The usual procedure upon arrival was to inspect the grounds and building, but this time my commander immediately went to the security section of the building to debrief security personnel and guards.

I entered the facility from the back door and then encountered the Site Manager, a Tech. Sergeant, who immediately took me into the day room and asked if I had been briefed on the previous night’s events. I said I hadn’t.

We then proceeded toward the windows on the west side of the day room where he described to me the large object with flashing lights that had been hovering just outside the fence that night, and he spread his arms out in front of him to indicate its size.

Based on his description, I estimated that the object may have been 80' to 100' wide and about 100' from the building, maybe a bit closer.

I immediately asked if it had been a helicopter, and he said that it just hovered with no noise being heard, quite unlike the usual noisy helicopters heard from within the building.

I also asked what the flashing lights were like, but he could not answer. They were unlike any he had ever seen, they were not like the usual beacon lights on planes, but something like a pulsating glow.

He then said that the object, while hovering close to the ground, then glided to the right toward the North end of the building out of sight.

This location put the object almost directly above the hardened Launch Control Capsule located 60' below ground. This was the Launch Crew Quarters and the Launch Control Center for the ten interconnected nuclear tipped ICBM missiles located 4 to 14 miles in all directions from the facility.

Security personnel confirmed everything that the Site Manager had related to me. My commander and I then proceeded to take the elevator down to the Launch Control Center to relieve the two man officer crew below. After entering the capsule, our eyes were immediately transfixed on the Launch Control Console, which showed that all missiles were off alert and unlaunchable.

The outgoing crew briefed us on the wild events that transpired overnight, and indicated that the missiles malfunctioned at the time the object was hovering directly above the capsule and next to the main gate.

We speculated on the possibility of an EMF pulse that might have created the situation. We had no doubt, however, that the 10 outlying nuclear tipped missiles of November Flight had been compromised, tampered with, and put out of commission by the object that had paid a visit.

Normally, it was quite unusual to have even one missile down, except for maintenance, and Wing Headquarters was very proud of having more than 95% up time for all 150 missiles in the Wing.

The following morning, after we had been relieved by a follow on crew, and we had arrived topside, I attempted to further query the Flight Security Controller who had been on duty at the time of the situation, but he interrupted me and said that he had been instructed to not discuss the incident.

That is when my commander told me that he had received a call while I was on a scheduled rest break below ground, and he was told that we were to never discuss the incident. When I asked where the directive came from, he said the OSI.

With no discussion allowed on this subject, my crew commander and I were left in limbo, and left on our own to conjure in our own minds how other similar situations might unfold and be handled.

This serious lack of follow through by the Air Force was more than bewildering and it served to keep this situation on our minds.

Altogether, there were a dozen of us involved with this incident. My commander and I were not there during the encounter, but we had to deal with the ramifications of the incident, and I will never forget the frightened emotion on the faces of topside airmen who were gathered there with me when I was briefed by the Site Manager.

Besides those of us at the Launch Control Facility, there had to be many more personnel involved, including maintenance people who had to retarget and realign the missiles, also additional security personnel to guard and protect the missile Launch Facilities, and who knows how many other concerned people there were on base.

Everyone had been silenced. The incident was never discussed and I never heard a word of any other incident from people that I associated with. I never spoke a word about my incident for almost 40 years, and my wife never knew.

After several years of searching the internet, in hopes of finding someone who could give me a clue about my incident, I then found what was described by Captain Robert Salas and I felt an immediate joyous freedom from the haunting memory that I had harbored for so long. I then quickly informed my wife.

Since then, I have run across several missileers from my days at Minot who were there with me in the Wing, and two of them have gone public with their own experiences. Two others have described their unique experiences to me, but they have pleaded that I not divulge their names. They fear losing their Air Force pension, or losing their personal integrity in keeping a secret, or of being ridiculed. I also know of two other officers involved in incidents, but they will not admit to their secret, probably for the same fear.

And then there is the late Captain Val Smith of my squadron who was mentioned in official documents released via the Freedom of Information Act. He was interviewed by the late Dr. Allen Hynek of Blue Book fame who wrote an article in the Saturday Evening Post, published on 17 December 1966, which described the incident that Smith was involved with on 25 August 1966.

Hynek stated in that article that:

This incident, which was not picked up by the press, is typical of the puzzling cases that I have studied during the 18 years that I have served as the Air Force's scientific consultant on the problem of UFOs.

Just prior to release of that Post article, the Minot Daily News got wind of it and then published, on 6 December 1966, a front page news item with a major bold headline that read:

In 1966, when I was at Minot, the evidence was everywhere that something quite unique was happening, but I was embedded in a shell of silence.