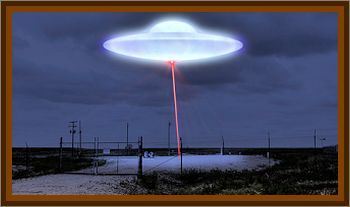 US missile guards and radar operators make multiple sightings of color-changing UFO's from 11:30 p.m. - 3:00 a.m. in cloudy weather. One UFO hovered at a height of 10' very close to one witness, an officer, who was taken ill thereafter. Explanation: aircraft.

Two guards on post about 10:00 p.m. reported that a glowing saucer-shaped object at 45O' altitude in the NE descended toward them, then receded. Radar was alerted, and reported an unidentified target at 95 miles due north, very near the horizon; a fighter was unable to locate it. A strike team sent out to the site of the first observation reported unexplained white lights near the southeast horizon. These may have been aircraft, and the original object Capella.

The investigators went to the AFB and talked with several persons involved in the reported UFO sightings. Their principal findings follow:

About 10:00 p.m. a guard walking his post at missile site Mike 6 reported a luminous shape at about 45° altitude in the northern sky. It exhibited limited lateral motion, but always came back to its original direction. It appeared about the width of a thumb, presumably at arm's length and continually changed color from green, to red, to blue in turn. It seemed dim relating to stars. When it was apparently nearest, it appeared like a luminous inverted dinner plate.

The guard was frightened and woke his partner, who was due to relieve him at 11:00 p.m. Both watched the object. Meanwhile, their captain sent out a strike team to Mike 6 and alerted the south base radar crew. The latter reported about 11:30 p.m. that they had an unidentified target on search radar at 95 miles, azimuth 357°. A little later, presumably the same target was picked up on the height finder radar at 95 miles, azimuth 360°, altitude 2,400'. Later it was reported at 4,400' and changing altitude "every so often;" it was observed from 2,400' to 8,200' altitude and varied a degree or two in azimuth, but the range of 95 miles did not vary.

The target remained continuously on the radar until the operator was relieved at 3:00 a.m. Except when a fighter was sent out, it was an isolated target; no other aircraft, ground clutter, or noise pips were seen within 20 mi. of it. The pilot of the fighter sent to intercept the radar target reported that, guided by the radar crew, he had flown over the target location at 1,000', 2,000', 3,000', 4,000', and 5,000'. The radar verified that the plane passed through or very near the target, but the pilot saw nothing, nor did he detect anything on his radar or on his infrared detector.

By the time a strike team reached Mike 6, about 11:20 p.m. the original object was gone. However, they and several others noticed one or more yellow-white lights very low on the southeastern horizon, in the direction of the airstrip at the base 50 miles away. These moved irregularly over a range of about 35° in azimuth.

At the request of the Colorado investigators, an officer sometime later went with one of the Mike 6 guards and the two members of the strike team to the Mike 6 site at night. There they pointed out as accurately as possible the locations of the objects they had seen. The guard, relying on a nearby fence as reference, indicated that the object he and his partner had first seen had ranged in azimuth from about 0° to 55° but had been at about 40° most of the time. It had been "very high." Soon after the strike team had arrived, he had been trying to watch the yellow-white light on the southeastern horizon, and when he looked again to the NE the original object was gone. The leader of the strike team indicated that the original object had been pointed out to him by the guard at about 20° azimuth; it was "unusually bright and very high." His partner did not see it. The officer stated also that it was possible from Mike 6 to see the lights of aircraft in their landing approaches at the AFB; they would have been very near the horizon because of the local topography. One large airplane had landed at the base at midnight, and two others at 12:29 a.m. The officer thought it highly probable that the white light reported in that sector had been the landing lights of one or more of these aircraft.