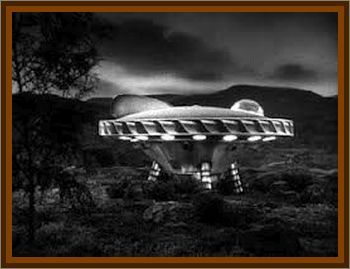 Paul Miller and three friends were on their way home after a hunting trip close to Minot, North Dakota. Something they described as a glowing silo landed on a nearby field. They first thought that it was an airplane that had crash landed, but they were forced to change their minds when the object suddenly disappeared. When the four decided to drive away, the object reappeared and two humanoids stepped out of the craft.

Miller, who was struck by panic, shot one of the beings, apparently injuring it. The second being fled. On the way home, Miller and his team had a blackout and lost track of three hours. They then decided not to tell the story to anyone.

The next day when Miller arrived at his office, at Minot Air Force Base, he was visited by three men wearing black suits. They said that they were from the government and they began asking questions about his encounter and Miller later recalled that it seemed that they knew everything about me, and they probably already knew my answers. Instead it seemed that they were more interested in what clothes Miller had worn at the time of the encounter and the men followed Miller home to take a look at them. The men made such a threatening impression on Miller that he didn't dare to tell his story for many years.

In November 1961, Four Men, two with very high security ratings, observed a UFO landing in a field.When they investigated they found several humanoid figures on the outside of the craft. One of the men fired his gun at an occupant of the craft who seemed to be waving them off. The humanoid fell to the ground and was carried back into the UFO, which then departed the area. A govermment investigator debriefed the men and took samples of their clothing, but no report on the incident was ever made public.