UFOs Over Minot Air Force Base 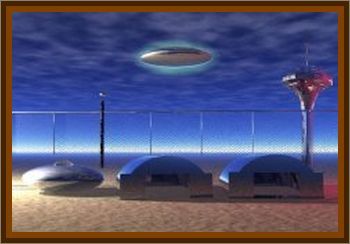 Air Defense Command radar tracked an unidentified target descending over the Minuteman missile silos of the 91st Strategic Missile Wing at Minot AFB, ND. Base security teams quickly converged on the area and saw a metallic, disk shaped craft ringed with bright, flashing lights moving slowly. The disk stopped and hovered about 500' off the ground, as security police held their fire and watched in awe. The object began moving again and circled directly over the launch control facility. F-106 fighter/interceptors were standing by on the flight line, waiting impatiently for an order from NORAD to scramble. When the order was not forthcoming, base operations decided on their own to scramble the interceptors. At that moment the UFO climbed straight up and streaked away at incredible speed.

June 6, 1968 Southwest of Minot ND. An MP got a call to one of the missile silos. The sergeant on duty took two other men with him. He told me that they had come over to see a UFO over the silo. The guards at the silo were like statues. The locks on the gates were open, and gates open. The sergeant had contact with the officers down in the silo. They were very upset, it seems that the missile had been armed and unlocked in launch mode, and that the warhead was armed.

October 24, 1968 Missile crews, control personnel and maintenance personnel observed a UFO in the vicinity of the base. This is a transcript of the conversation held between the air traffic controllers and the B-52 crew with call sign JAG Three one.

At 3:30 a.m.: The controllers received the information that there was a UFO 24 miles to the northwest. A B-52 jet bomber (JAG 31) flying at 2000' was on a calibration check and requests a clearance from radar personnel.

JAG 31: Roger climb out on a heading of 290 climb and maintain 5000. Stand by for higher altitude. We're trying to get it from center now.

At 3:35 The controller asked: And JAG 31 on your way out to the WT fix request you look out toward your one o'clock position for the next 15 miles and see if you see any orange glows out there? Roger, roger glows 31, Someone is seeing UFOs again! Roger I see a... Rest of transmission garbled.

At 3:52: The controller then radioed, Three one, the UFO is being picked up by weathers radar also. Should be at our one o'clock position 3 miles now.

JAG 31: We have nothing on our airborne radar and I'm in some pretty thick haze now and unable to see out that way.

At 3:58: JAG 31s pilot then requested an instrument guided approach, and received instructions. The pilot called, and then the transmitter went dead, but they could hear instructions from the ground. The controller asked them to squawk ident, Which meant to use the aircrafts transponder which would paint the controllers radar with a large, glowing blip with the aircrafts identification.

At 4:00: The controller then radioed, JAG 31 if you hear me squawk ident...JAG 31 ident observed. Cleared for the approach attempt. Contact on frequency 271 decimal three and you're cleared for the low approach. They continued to have radio problems for another couple of minutes.

At 4:02: They were able to communicate easily. The pilot said, Our UFO was off to our left side when we started penetration.

Roger, understand you did see something on your left side. We had a radar return at about a mile and a quarter, at nine o'clock position for about the time we left 200 to 14... They discussed the troubles with the transmission and then, Affirmative. I was wondering how far out did you see that UFO?

JAG 31: He was about one and a half mile off our left wing at 35 miles when we started in and stayed with us 'til about 10.

I wonder if that could have been your radio troubles?

Jag 31 are you observing any more UFOs?

JAG 31: Negative on radar. We can't see anything visually.

JAG 31: Request you have someone report to base ops after you land.

Near the end of 1968 a UFO hovered over a silo, after leaving, personnel discovered that the missile was armed and unlocked in launch mode, and the nuclear warhead was armed.