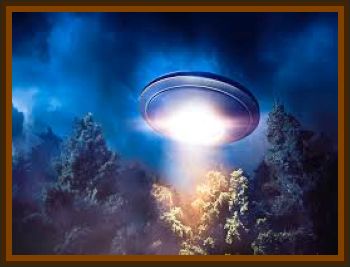 On a bright sunny day I was driving on Germantown Road just east of Richardson School and noticed a bright light in the sky to my left/North.

The light/object disappeared by the hill to my left, so I traveled another 200' to 300' and took a left and went to the top of the hill, coming to a stop and there 200' to 300' in front of me was a large, house sized circular object hovering perhaps 40' above a house.

I noticed 3 cars parked below the object and then noticed 3 people moving quickly to their cars, getting into the cars and driving away fast. For 10 seconds I thought about following them, but then I diverted my attention to the object which was not moving and not making any sound but still in position above the house.

In less than the blink of an eye, it was gone, no sound, just disappeared to the North. And, that was that.

It has been decades but the memory of that craft, the 3 people leaving, and the noiseless, incredibly fast disappearance of the object, remains with me.