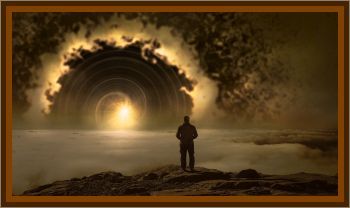 Mrs. Meagan Quezet, a housewife in her 30s, was sitting in the lounge finishing off a book she had been reading. She remembers looking at the clock and noting that it was 11:50 p.m..

Her elder son Andre came into the living room saying that he had been unable to sleep and could he make a cup of tea for both of them. Meagan readily agreed.

It was then she heard their part bred Daksie dog, Cheeky, barking outside. Cheeky had recently been knocked down by a passing motor car and his back had been badly damaged. He had only recently been nursed back to health and Meagan did not want anything else to happen to him. She went outside and called to Cheeky, but she soon realized that he had managed to get outside the gates and she knew to that if she left him, he would bark and bark and disturb the neighbors.

She went to the front gate calling to the dog, but by that time Cheeky had gone up the road. Realizing that Cheeky would sooner come to Andre than to her, Meagan shouted for him to come and help her get Cheeky back into the garage. Meagan was worried about the area and wanted Andre to come with her up the road to look for Cheeky.

#14 Saul Jacobs Street is about midway up the street. At the top there is a T junction and the road crossing there is called Tindall Road.

Beyond that, about 40' further up there is a road running parallel to Tindall Road, which actually has no connection with it at all. This is a newly made road, a connecting link between the factory area of Chemdor and Lupaardivel Industrial area and used mainly by heavy traffic during the day, very little traffic passed that way during the night.

When they neared the Tindall Road, Meagan saw Cheeky still barking frantically, together with most of the neighborhood dogs. At the same time she became aware of a bright pink light on the top road. She said to Andre:

Look, they’ve got lights on that road up there.

No there aren’t any lights up there Mom, he replied.

Well then, what’s that very odd looking thing there?

Meagan queried pointing to the pink glow she could see above the road.

Her immediate reaction was that it was a light aircraft come down on the road. She mentioned this to Andre, quite convinced that she was right.

Worried by this possible eventuality they moved quickly up towards the top road. The access is through some ditches and uneven ground, overgrown with grass and small bush and steeply slanting to the top road. This embankment has not yet been cleared and it provides an excellent place for children and their dogs to play. Meagan could not think of any other explanation for the very bright pink light. She said it might have been a police car with its light on the roof, but she could not hear anything and normally the police car light had a sort of whoo-whoo sound to it.

Also she realized that the light was quite high up on the road, as though topping a plane of some sort.

They moved as quickly up the embankment as they could, towards the light and the new road which sloped down away from the embankment. As they came closer Meagan could see it wasn’t a plane. They approached it from the side and were rather worried as they got closer and she did not know what was going on. It looked odd, but she was a nurse and felt that if there was any trouble at all, perhaps she could help.

As they drew nearer to the object, Meagan could see that whatever it was, it was encased by a pink light, a very bright, absolutely pink light.

Both she and Andre were adamant about the color of the light. It completely surrounded the craft, although Meagan could see no light which might have caused the glow. There were two lights on either side of an opening they could see in the side of the craft and one on top. The same pink glow seemed to emanate from within the openings.

As they walked up towards the edge of the road, she could see the craft and as far as she was concerned it was a craft of some sort and was standing straight on the road, although the road itself is a slant away from the edge where they were. The object was also egg shaped from the top down. At the bottom where it appeared the egg part had been cut straight across, it was supported by four legs. They were spider like legs, not very thick, about 4" and a sucker pad fixed each leg onto the road. The legs were about 35' high. Meagan estimated the height of the craft as 12' and its width possibly about 16'.

Meagan felt no fear at the time and thought it was some kind of experimental craft, albeit rather unusual. As they stood there they spoke together quietly wondering what it could be. She does not know why they were so quiet, it was almost as though they did not want to be overheard. Then as they came even closer to the craft, 5 or 6 men stepped out of the opening onto the ground.

One or two of them went to the left hand side of the craft away from them. Andre and Meagan were not absolutely sure if they were one or two. Two of the men remained near the center of the craft and the other two came to the side where they were standing. One of the two near to them was talking quite a lot and the other was answering in monosyllables. The one that was doing all the talking had a high pitched voice and the words sounded rather sing song, but they could not actually hear the words, just the sound of it.

Andre saw one of the men on the far side bend down and pick up some sand from the sandy bit off the edge of the tarmac. They were talking and Andre saw this man lifting the sand in his hand and he let it trickle through the fingers.

Meagan actually saw them bend down and touch the tarmac but she did not see them do anything with the sand. According to Meagan to closest she could compare the language they spoke, was to Chinese. But it was not Chinese, she could not imitate it because it was very high pitched. They could not see the men’s faces too clearly.

They were all covered up by their overalls with only their faces showing except for two of them, the one nearest to them and one on the far side. Their heads were uncovered.

Of the two men approaching Meagan and Andre, the one with his head uncovered had thick dark hair, hair which was curly and a beard. Then suddenly Meagan said, the one who was doing all the talking obviously realized that they were standing there, for he said something to his companion. At the same time he took a step back as though handing over to the bearded man. They were standing at the top of the embankment on a level with the men and she had the impression of looking slightly down at them. Meagan is 5' 5" in height, and the men came up to her chin. She thought they were about 5' in height and very slender in build.

Meagan said their suits covered them completely so that one could not see any muscles or anything like that. Except for the two individuals mentioned, the suit went over their feet and right up to their heads, leaving only the faces visible. The hands were clear as far as she could recall, and they appeared to be quite normal. Meagan thought that the colors of their suits was white, but Andre thought it was pink, but Meagan thought it was just a pinkish effect from the light.

The craft was metallic lead in color. It had no contours to it, no fins or anything like that, just smooth. Meagan then noticed that the bearded man was looking at her all the time. Still looking at her he bowed low to the waist and said something Meagan thought it was a greeting of some sort. All this time his eyes never left hers.

The man said something with three syllables in it. I heard it quite clearly.

The man with the beard whom she presumed was in charge, had ordinary black hair. But his skin was dark, like the Middle Eastern people, a sort of olive. But he wasn’t black. Meagan felt herself drawn to the man with the beard. She could not see the color of their eyes, but the bearded man’s eyes were quite normal, like an ordinary person’s eyes. Meagan had the impression that the bearded man’s eyes were quite translucent, as though she could look through his eyes.

While the man greeted her and bowed, Meagan just stared at him.

Andre was standing slightly behind her, and to her left.

She said to him:

Andre go and get Daddy, and run, please run.

Andre ran straight away, frightened. He had not expected to see anything like this. The men spoke to each other in short monosyllables, as Meagan stared at them. But the next thing she knew they had jumped back into the craft. They seemed to have not made any effort in jumping back into the opening of the craft, they just sort of stepped up.

One moment the door was open and the next moment it was closed. She did not see the door close. Within seconds of the door shutting Meagan heard a buzzing noise. She described it as sounding like bees in a hive, that was the closest she could get to the sound.

In the meantime, Andre who had been going down the embankment as fast as he could in the dark stopped when he heard the buzzing noise. Meagan herself stepped back. She was afraid, she did not know what was going to happen next. She did not know whether to run or not.

The object seemed to right itself and it went slightly to the left from where it was. Then the legs started telescoping into the craft, or went straight into the craft. It hovered for about a second or two and then it shot off into the sky very quickly. The clouds were very low that night. The whole thing looked like a pink light and it went straight up into the clouds and disappeared in about 30 seconds. The clouds were colored that same pink color for quite a while after it had gone.

Meagan thought the whole episode lasted about 10 minutes but it seemed much longer. At this point Andre had returned to the site and both stood there for a moment or so, quite flabbergasted. Then they walked quickly down the hill to their house. Meagan’s intention was to wake her husband up immediately but as they walked home she realized that there was nothing he could do. No marks were found on the tarmac.