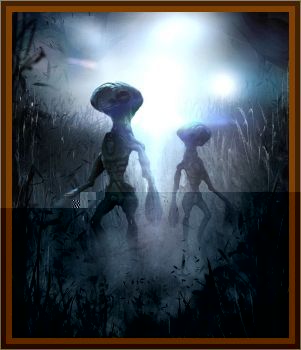 John J. Doe claimed that he was working in the fields in a rural Iowa area where he operates a farm, when his attention was drawn to the sky by a flash of light. He didn’t pay much attention to it at first, because he thought it was an airplane, but did note its silver color and the fact that it was approaching him.

As it got closer, it was obvious that it was an unusual object, shaped like an egg and slowly descending into John’s cornfield. Just prior to landing, legs or a type of landing gear grew out of the bottom and the strange craft landed gently in the field, about 100 yards from the John.

A port of some sort opened on the side near the bottom and then some people got out. In John’s words:

They messed around in the corn for a while, then got back into the craft and it took off.

As the object took off, a blue flame shot out of the bottom and the legs retracted. There was a slight roar as the ship shot into the sky. The corn shocks in that area of the field looked as though they had been caught in a whirlwind, but John found no burned vegetation.

The people were thought by John to be about 5' tall and seemed to be wearing one piece flying suits. From 100 yards distance, John said he couldn’t see much detail and he didn’t attempt to get any closer. John said the object cast a shadow when it was on the ground, was faster than a jet when he first saw it, but slowed as it approached the ground. When it left, it was out of sight in a matter of seconds. He estimated its size to be about 15' to 20' tall.