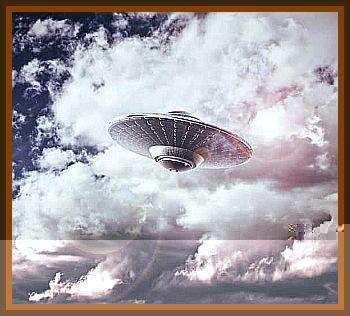 On a midsummer morning in 1959, Mr. D.J. Harris, an area insurance agent, was walking down Charles Street in Milford Haven at about 11.00 a.m.

About a hundred yards ahead of him, on his side of the street, was the 70' high tower of the Tabernacle chapel. He heard the sort of whispering sound one would associate with a low flying glider. Simultaneously an object appeared above the buildings on the right hand side of the street, roughly opposite the chapel, and he had a very clear view of it.

It was following a downward path and was about 50' from the ground. He describes it as enormous, and says it must have been 150' in diameter. It was a metallic grey in color rather like weathered aluminium. This object was travelling quite slowly and was spinning equally slowly, so much so that Mr. Harris thinks he saw only a part of one revolution while it was in view. The object was in the form of a flattened ellipse and around the widest part of the diameter appeared deep scallops or fluting. Although the object was rotating it didn’t alter the profile it was presenting to the observer, and Mr. Harris agrees that this suggests that the plan view must have been circular.

This object was in plain view for at least 10 seconds as it sailed low over the street before disappearing behind the Tabernacle tower.

The amazed witness at once ran down the street believing that the thing, whatever it was, had crashed into the waters of the Haven, since this is where its downward track must have ended. However when he reached the chapel and could look at the sea there was nothing whatever in sight. Nor was anything ever reported.

This case seems to me to be one of particular interest. I have interviewed Mr. Harris at great length and am convinced he saw what he describes. However I am quite unable to believe that an object of this size, moving almost at street level, was generally invisible at Milford that summer morning. There are just too many people around and too many pairs of binoculars on ships for it to be possible.

Mr. Harris agrees about this. We are really forced to the conclusion that no one saw this UFO except the witness and that, in fact, it was visible only to him. If so, this invests flying disks with a curious new quality. Like the ghost which may be visible to some witnesses but not to others, the Milford UFO may be offering us a gratis clue as to its real nature.

In the course of conversation I found that Mr. Harris had certain psychical qualities such as the ability to dowse. He was also keenly interested in the possible implications of what he had seen. However he had never seen a UFO before, nor has he seen one since, nor has the sighting affected his way of life.

One wonders therefore how the observer comes to be selected as an observer, and what laws are involved. Is it what T.C. Lethbridge called resonance, a question of being on the right mental waveband at the right time?

Are saucers in fact devices for lowering the frequency of beings normally existing on a much higher frequency-band in the scale of cosmic existence? Do the hard landing cases followed.

By the eventual flying away and disappearance simply show the process going through a full cycle? The investigator in Wales is impressed by the fact that so many people have had UFO experiences of one sort or another, yet these are reported outside the family only rarely.

One wonders how many thousands of such encounters occur with no one being any the wiser. The unknown flying object is still with us and probably has always been with us. My latest report is from a dentist who told me that he was standing with friends overlooking St. Brides Bay when they saw a UFO in the form of a saucer above the sea.

He was sufficiently impressed to amass a large collection of UFO books in an effort to make sense of the phenomenon. I can only suggest that Dr. Williams and other skeptics forget what they know and concentrate on what they don’t know. Because, quite clearly, they are missing something.