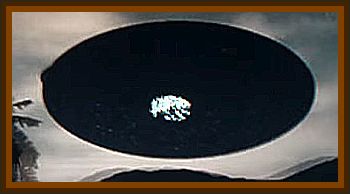 On foot, returning from a short errand. A final look at the night sky, I turned around, and there it was, a large black disk with lights going round and round, just sitting there in the sky, low enough to land, I reckon half a mile up maybe less, hovering, I thought it was going to land, it just sat there.

Brass band music was coming from a nearby sports ground, the rehearsals of a marching girls team.

I strained to hear the drone of a helicopter, it was low enough to lift the dirt away from the ground as a chopper does, no, not that.

I heard our neighbor come from his house, and made his way towards me, not noticing what was in the sky, when I stopped him and proceeded to ask him, pointing to the object in the sky.

What is this? So that I’m not dreaming.

He turned around, looked and said holy shit, it's a UFO.

We stood there for sometime, before he left , as he mentioned that he had things to do in a neighbors home, two houses from mine.

Being 16 on the street after dark ,I returned home quickly, to find my mother stressed over the new TV not working, I said I had just seen a UFO, to her disbelief, a member of the family ran from the house to catch a glimpse of it and returned to say that it had gone.