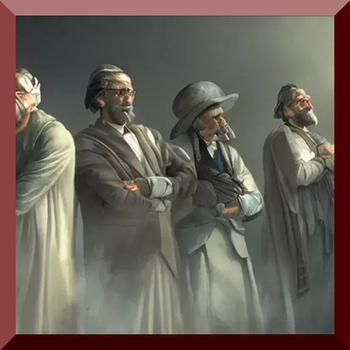 Noted philosopher Fazio Cardano was resting in his home after a day’s work.

As he sat in the kitchen area, out of nowhere 7 majestic looking men appeared in front of him.

He described them as wearing bright flowing robes and sandals and what appeared to be Greek tiaras on their heads. They had black hair and were of an unnatural beauty and appeared to be 30 to 40 years of age.

They briefly spoke about philosophy, the existence of the human soul about life and death on earth and basically about the transient nature of man’s existence on Earth.

When asked who they were, they said that they were men composed, as it were, of air, and subject to birth and death. It was true that their lives were much longer than ours, and might even reach to 300 years duration.

Questioned on the immortality of the soul, they affirmed that nothing survives, which is peculiar to the individual. They remained for over 3 hours and when questioned about as to the cause of the universe there was disagreement between the men.

The tallest of them denied that God had made the world from eternity. On the contrary, the other added that God created it from moment to moment, so that should he desist for an instant the world would perish.