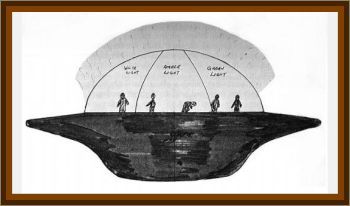 The Milakovic family live at 432 Cannock Road. On the afternoon of November 20, 1968, the Yugoslavian couple and their 11 year old son, Slavic, left Hednesford on a house hunting trip. They journeyed through the English countryside to Rugeley, Abbots Bromley, and stopped at Hanbury to view Hanbury Hall. Hanbury, on the Staffordshire Derbyshire border, is midway between Uttoexter and Burton-on-Trent. 3½ miles to the northwest is Central Workshop 32 R.E.M.E., an army installation. 2 miles to the northwest is a Royal Air Force station, used as an ammunition dump, and there are very vague rumors that nuclear weapons are stored there. 3 miles to the south is a World War II airfield, used by the Ind Coope brewery firm for light aircraft.

On the road home, the Milakovics stopped just outside Hanbury to look at an old house for sale. As they continued on, dusk was rapidly approaching. It was between 5:30 p.m. and 5:45 p.m. The couple saw a rabbit scurry across the road, followed by a number of other rabbits from a hedge on the left side of the road. Glancing to the left, they saw a brilliant object in the field. Milakovic stopped the car as the UFO rose slowly and flew over the car. The couple got out of the automobile and watched as the object moved over a field on the right side of the road toward a house about 100 yards away. As it got over the house, it stopped, hovered, and quivered like jelly.

Doris Milakovic said that the air temperature appeared considerably warmer as the UFO flew overhead, but, as it moved on, the temperature dropped. She also said that the object looked as wide as the house. For approximately five minutes, Mrs. Milakovic, her husband & son saw what appeared to be several humanoid figures walking across the bright top of the UFO. Intermittently, some of the figures were seen to bend down as though looking at something in the part of the object below the rim. Then the object began moving up in a pulsating or jerky movement, Its light intensity greatly increased and Milakovic felt his eyes were burning.

Thoroughly frightened, Milakovic, normally a brave man, pushed his wife & son into the car and sped away from the scene.