Ball Of Yellow Light With Dancing Spikes Of Light 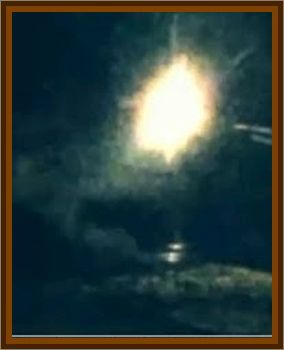 This story was related to me by my first cousins once removed at my great-aunt's, their mother's funeral.

Ball of yellow light with dancing spikes of light, around the circumference, one of the spikes reached out to me.

I was 3 years old, and observed a ball of light that looked similar to the sun, about the size of a beach ball floating over the power lines. It traveled silently and slowly from east to west. The ball had pointed spikes of light dancing around the edges of it. The power lines were running through the easement between the properties. I was about 60' to 70' from the light. As the light passed over to the neighbor's property to the left of me, it paused, then one of the spikes of light shot down, through the chain link fence, right up to me. The light beam was about 3" wide, and thin as a sheet of paper, and tapered to a sharp spike.

I don't know if it actually touched me, if not, it came within an inch or two of me. The spike of light remained about 20 to 30 seconds, then it withdrew back into the ball of light and began moving slowly west again. When the spike of light extended out to me, all of the rest of the dancing spikes of light stopped moving.

After the spike withdrew back into the ball of light, all of the spikes of light began dancing again.

At that point, I ran into the house to tell my mother what I had seen. She dismissed the report, after all I was only 3 yrs old. When I went back outside, it was gone.