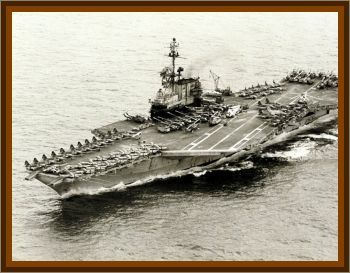 Location: The Gulf of Oman

In 1989 the aircraft carrier USS Midway (CVB/CVA/CV-41) was on a tour of duty in the Indian Ocean. On a mission in the Gulf of Oman, the Combat Direction Center, CDC, watch officer and his crew were electronically monitoring the positions and movement of all surface contacts to ensure a safety margin of three miles or more from any potentially hostile vessels.

Immediately the officer spotted three strong blips, contacts, on his radar screen grouped in a triangular formation. On the second sweep of the radar screen the officer was stunned to see that the contacts had moved a considerable distance in a remarkably short period of time. While this CDC group’s mission is to monitor and track ocean surface contacts, low flying aircraft are also periodically picked up on their low angled radar. These contacts however, were moving faster then any aircraft the officer or his crew had ever observed. The next unnerving thought to occur to the CDC officer, was that these were missiles. The officer checked with the airborne detection group within the CDC and they responded that they weren’t picking up or tracking anything at all. There were no contact blips flashing on their screens.

Tensions mounted quickly however, as the CDC Officer and his crew continued to track the three fast moving blips as they angled toward the ship. As the contacts’ rapidly got closer, two of the blips made a startling 90° turn away from the ship, but the third turned directly toward the ship. The CDC officer excitedly barked over the ship’s intercom to the observers on the ship’s superstructure that something was coming right at them at a high rate of speed. Accelerating, it was coming in so fast there was no time to react. When the object got within a mile of the ship it suddenly disappeared from radar. The CDC Officer again called out to the lookouts high above in the superstructure, asking if they saw anything through their binoculars. They reported that they looked at the exact location but didn’t see a thing.

The CDC Officer then reported the incident to his commander but was a bit taken aback by the commander’s lack of reaction. He didn’t react at all. Within a few minutes the CDC radar screens picked up the three blips again, very nearly in the same location where they first picked them up. Alerting the commander that they were back, the sequence of events played out nearly as before, with neither, the airborne radar or the lookouts seeing anything.

After this second incident the CDC Officer was more than a bit concerned that something had actually approached to within one mile of them without anything or anyone other than surface radar picking them up and tracking them. The air defense protection radius for an aircraft carrier guarding against air attack is 50 miles.

The CDC Officer calmly approached the commander and began discussing the close contact incident, commenting particularly on the incredible speeds and the virtually impossible 90° turns executed by the unknown contacts. The officer then commented that the only way he could have picked them up on his low angled radar was if they were flying 30' or lower over the ocean’s surface. He then speculated that the only way they could have disappeared so suddenly, within one mile of the ship, would be to dive beneath the ocean’s surface.

The commander then offered, in a rather hushed voice, that the CDC had, some months before detected an unidentified object in this general vicinity and had launched an Alert Fighter to intercept and identify the object. The commander stated that the fighter pilot had just managed to get within visual range and report the object as a strange metallic glint, when the object quickly accelerated away from the Navy jet and dove into the water. As the pilot flew over the point of the object’s entry into the sea, he reported no wreckage or any sign of oil or fluids floating on the water.

The Navy immediately sent one of the aircraft carrier’s escort ships over to the site to investigate, but no trace of a crash or of any type of debris was observed. While detailed reports were filed by the Officers and personnel involved, the Navy has reserved comment or official position on this incident.